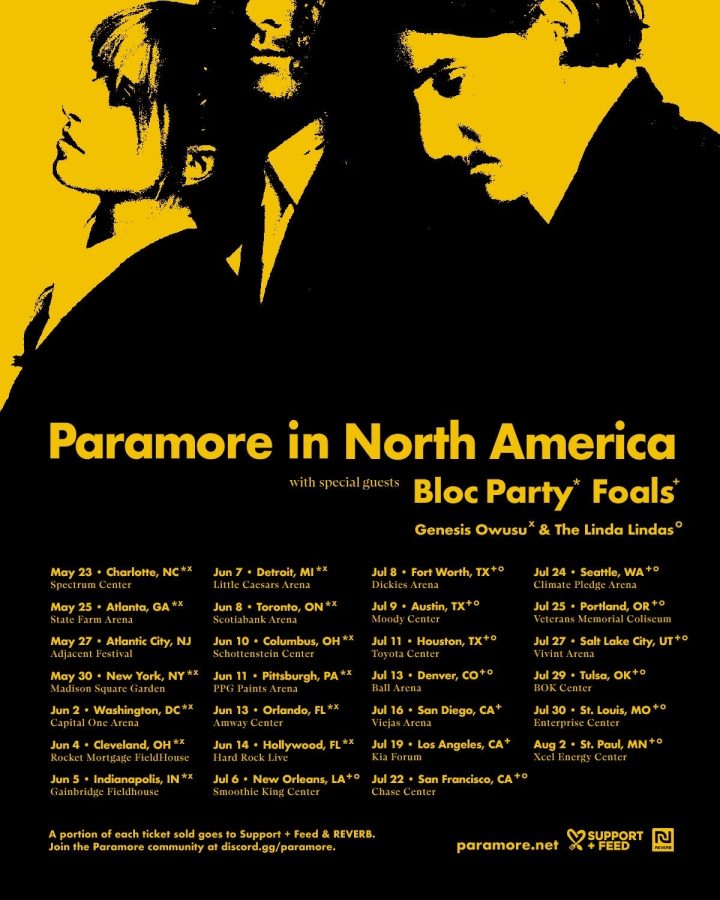 This is why I don’t turn this off: Paramore keeps alternative music alive

At approximately 10:40 a.m. on Friday, Nov. 4, in the middle of my AUx class, my hand shot to my mouth, barely masking the gasp that jumped from my mouth. I looked around to see if I’d made a scene, but no one was looking my way—in the corner of Anderson Hall’s AUx classroom, I sat by myself in unadulterated excitement. From there, I couldn’t focus on my work. I opened up a new tab on my computer, typed in paramore.net, and registered for the ticket presale for their newly announced show in my hometown of Pittsburgh, PA.

Though they have been teasing their return ever since the release of frontwoman Hayley Williams’s sophomore solo album FLOWERS for VASES / descansos, Paramore confirmed their reentry to the modern music scene with the announcement of the first leg of their North American tour on July 15, 2022. Their newest single, “This is Why,” came out on Sept. 28, 2022, following the style of their most recent album, After Laughter, while adding in a hard-hitting rock sound that mirrors their pop punk days.

Despite their five-year hiatus, the band has kept consistent influence in the music scene, most notably with Olivia Rodrigo’s “good 4 u,” which Williams and Paramore were given late credit in wake of controversy concerning its striking similarities to the Paramore hit “Misery Business.” Rodrigo is not the only artist using Paramore’s influence to revive pop punk—musicians like Machine Gun Kelly and Meet Me @ The Altar have covered Paramore songs as the 2000s staple genre experiences its new rise in popularity. With their influence in the pop punk revival, many fans speculated that Paramore would return to their Riot! era and hop on the nostalgia train, but instead, “This is Why” bridges the new wave influences of After Laughter while adding in the explosivity that comes with pop punk.

Choosing to evolve their sound rather than return to their roots is a bold move by Paramore. If they’d taken a pop punk route, they very easily could have dominated the modern scene as the idol that the big names look up to. Doing that, though, would be boringly safe—Paramore has already proven themselves to be a pop punk icon, so sticking with that sound would provide nothing new to the scene they’ve already heavily impacted. Instead, they’re branching out to establish themselves in a new genre, progressing alternative music forward rather than reinforcing a cycle of nostalgia. Though they may have inspired many modern pop punk musicians, they should not let themselves be defined by it—they need to explore new genres to let themselves grow as musicians. And their exploration is going well, too—“This is Why” has so far peaked at #15 on Billboard’s Hot Rock & Alternative Songs chart, and, though the new sound is polarizing, many long-time fans were elated by their unique comeback.

Paramore did pop punk, and they did it well. Now, it’s time for them to do another style well. And with the talent they’ve proven with “This is Why,” I have high hopes that they’ll establish themselves as icons in a completely different style of music. Their comeback album, also called This is Why, releases Feb. 10, 2023, and with that album, Paramore has a shot at advancing not only pop punk, not only synth-pop, not only a blend of the two, but also alternative music as a whole. There is a reason that I was so excited to see their new tour announced; they have been releasing consistently good music since 2005, and by letting their sound change shape through the years, everything they put out sounds fresh and creative. As one of the most influential modern alternative bands, Paramore’s genre-bending sound is refreshing to hear, and hopefully, it drives the scene forward.