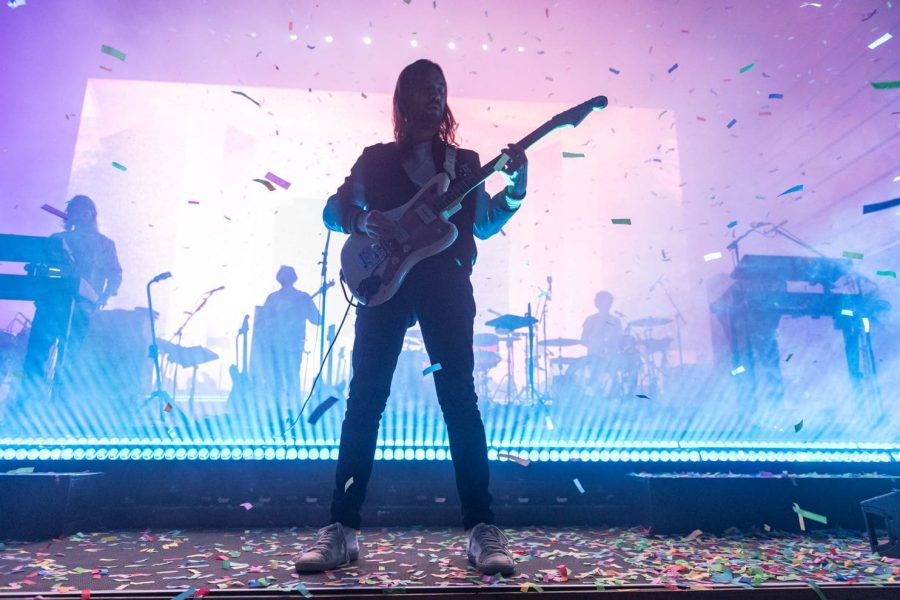 I could not have imagined a more satisfying way to wrap up the summer than seeing my favorite psychedelic rock band, Tame Impala, perform at The Anthem two days before fall classes started. Tickets went on sale back in April and I knew I had to get my hands on one. I contacted my best group of friends in preparation for us all to get a ticket and see the concert together. They sold out in two minutes. Tickets went so fast that they added another concert date, which sold out just as quickly. Panicking, we searched various websites that resold tickets and ended up paying more than expected. It was worth it.

On August 26, a swarm of psychedelic rock enthusiasts lined up outside The Anthem ready to see frontman Kevin Parker work his magic. After we passed through security, my friends and I gathered by the merchandise booth to scope out the goods. We each purchased Tame Impala t-shirts, grabbed some drinks, and scrambled through the crowd to seek out a good spot. After eagerly waiting for some time, the lights lowered, and the crowd roared.

Parker opened his set with one of his most well-known songs, “Let it Happen,” which was a solid choice to get the crowd fired up. It also so happens to be highly ranked in my favorite Tame Impala songs. The eight-minute piece has a build-up that was utilized as confetti of all colors struck into the air and rained on the crowd when the song dropped. People jumped up and down and threw their hands in the air, taking in the magical moment. It was surreal.

As the show progressed, so did the visuals. Tame Impala, being of the psychedelic rock genre, is associated with “trippy vibes,” which was sufficiently communicated. Vibrant moving patterns were screened alongside the flashy colorful lighting. The visuals were spot on paired with the vibes of the music and entirely captivated me at several points in the show. My personal favorite visual displayed Parker singing with a third eye edited onto his forehead during his performance of “New Person, Same Old Mistakes.” Visuals are extremely important and Tame Impala absolutely killed it.

Between songs, the crowd went wild as Parker spoke regarding the raving energy of his audience. He also graciously noted The Anthem as being one of his favorite types of venues to perform at. The energy of the music alongside the enamored crowd cultivated an amazing show.

After the final song, Parker and the band exited the stage as the crowd immediately demanded an encore. We waited some time until they returned to perform two more songs, one being Tame Impala’s most popular song, “The Less I Know The Better.” The crowd went wild. Parker would not have been able to get away with skipping a performance of this well-known song. But unfortunately, all good things come to an end.

The lights turned on and the crowd pushed out the venue, jostling towards the exit. As we were moving out, I looked at my friends, everyone’s jaws dropped in awe about the miraculous show we just experienced together. And we were not the only ones. I overheard many other people commenting on the surrealness of the show. There was definitely a strong fanbase present, which furthered the wild energy and created an all in all unforgettable time.

As tired as we were, we walked back to the car still fuming the surreal energy, and collectively reflected on how utterly incredible the show was. I grabbed the back of my neck, sore from headbanging. We hopped in the car and played some of our other favorite Tame Impala songs that we did not hear live, reminiscing as if we were still at the show. Tame Impala did not disappoint and if I had the chance to go back, I would in a heartbeat.