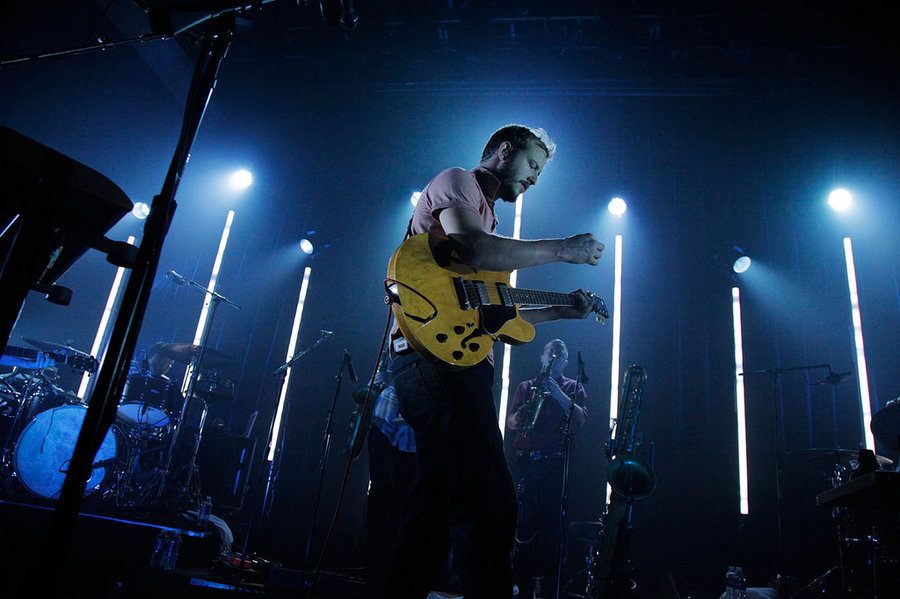 I first listened to Bon Iver back in 2008 as a child. I was eleven, and in some way, I knew he would be great. The first time I saw him live was right after my first breakup. It is the band that has been with me through my teenage years all the way to my early adulthood. Now the band is more mature, and so am I. Bon Iver represents my coming of age as well as the one for my generation. Having a chance to attend their concert is transcendental, cathartical, magical.

Bon Iver is happy, and it is excellent news. From the start, the concert is more electric, engaging, and positive. The audience welcomes the new album songs gladly, and the vibe of The Anthem is intimate and warm.

He still extracts all that raw emotion from the audience, but now it is more magnificent. By the point he plays Lump Sum, the first “oldie”, the nostalgia hits, and the first tears drop. This is contemporary music, this is what our generation sounds like, and we can’t complain. He is the Lou Reed, the Neil Young of our time. 666t is refreshing, and the live band adds another level of complexity. The emotion is overrunning the place, from the drummer, the bass player, and everybody in the audience.

The stage lighting is illuminating a path of peace without being overwhelming. It allows the audience to see the expressions on the band’s face, and the concert becomes much more personal. Most of the eyes in the audience are watery, and the mouths smiling. Faith sounds like something in between a lullaby and a hymn creating a direct connection between the audience and Justin. Our kids are going to call this song a classic.

The new addition for the band in piano and vocals adds a full range of notes and sentiment to the performance. While Justin is the center of the performance, she steps up as the driving force. The shows transcend from lullabies to electronic indie, to folky, to stadium side ballads, and full-on rock. It also sounds like a gospel church. And it works perfectly.

He plays I Can’t Make You Love Me with Bruce Hornsby, and I’m full-on weeping. He pulls the most intimate strings in the audience, and it feels like an emotional release. Magical, again transcendental. The physical catharsis comes in Perth. Every cell of the body lets go, pulled by the drums, pushed by the bass, and elevated by Vernon’s voice.

Towers is faster, snappier, giving this “old” songs a revamped sound that fits better with the new warm vibe of the band and concert. It is respecting the original while making it contemporary. Bon Iver is doing for us what LCD Soundsystem did for the early 2000s in NY. This is our generation’s band, the one that represents our depression, our first loves, breakups, and coming of age.

Justin seems much more comfortable and engaging this time and is thanks to the band. Salem showcases how great the new album is and even pulls a couple of emotional shouts from the audience. I’m kind of tearing up. I’m happy and heartbroken again for some reason. Naeem scratches the soul, and I’m pouring out of my eyes. Justin pours his own soul into the song, and the whole place is in a trance. Before going back for the encore, he looks moved. DC’s concert audience has responded incredibly. Such a great crowd for such a great band.

The highlight of the encore is Blood Bank, where the band transforms into full-on indie-rock form, and the guitar solo could come from a 70s Velvet Underground song. Everyone is crying and smiling. The concert closes with RABi, the audience appreciates it. It’s a transcendental night, a celebration of our generation, our emotions. A performative representation of our coming of age. Thank you for letting us grow up with you, Justin Vernon. Thank you, Bon Iver.