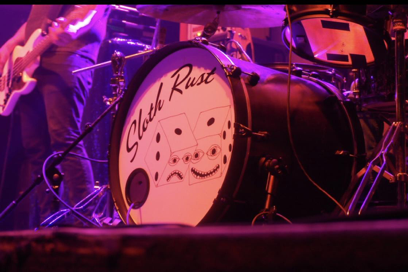 Recently in my regular article, Respect the Classics, I wrote about the incredibly talented and underrated grunge rock band, Slothrust (if you haven’t read it yet, you should.)  The stars somehow aligned in the universe and I was granted a Press and Photo Pass from none other than the PR rep for Slothrust. I, of course, was freaking out, this meant I got to sit in the photographer’s pit in front of the barricade inches away from the band (!!!), a completely new perspective for me!

Here’s a rundown of the concert from that perspective. This was my second time seeing Slothrust open for Highly Suspect, but it was such a new and interesting experience in the pit; other seasoned photographers were calm, professional and didn’t seem to know who the band was (or, at least, were really good at hiding it). I, on the other hand, could not hide my giddy excitement and was unable to keep from headbanging and singing along. The second Leah, Kyle, and Will came on the stage, I let out an involuntary screech. They seemed so cool and also super confident with their presence on stage. Leah has the incredible ability of a demanding stage presence effortlessly. It’s so refreshing to see a leading rock lady just being herself and using her skills and talent to showcase the band instead of using her femininity. She moves closer to the mic, and the whole crowd is all ears, ready to hear her sing or joke or say “hey DC, we’re Slothrust.”

The band dove headfirst into the set, drums thumping, bass plucking, and guitar shredding. They played a whopping 12 songs, a mix of their older jams and some newer tunes from their most recent album, The Pact. Some of my ALL TIME Slothrust favorites were played, including “Beowulf,” “Crockpot,” and their amazing cover of “Sex and Candy,” Marcy Playground’s 1997 hit. It was fitting that they covered this song; Leah is such a 90s kid, with her love of grunge rock and her Destiny’s Child shirt that she decided to wear on the night of the concert.  I was able to sit in the pit for the first three songs which seemed to be a pit code that everyone knew before I was rushed off with the rest of the photographers. Instead of fleeing towards the back room (which is not as exciting as I thought it would be, but I digress), I stood on the floor area near the rest of the rowdy crowd and jammed out. Everyone was either bellowing out the words along with Leah, headbanging or applauding the various bass and guitar solos. (If you want to get a taste of Slothrust crushing their solos, listen to “Surf Goth.”) All around me people looked thoroughly impressed or pleased. The whole experience was grungy, rocking, powerful, and renewed my love for this awesome trio.