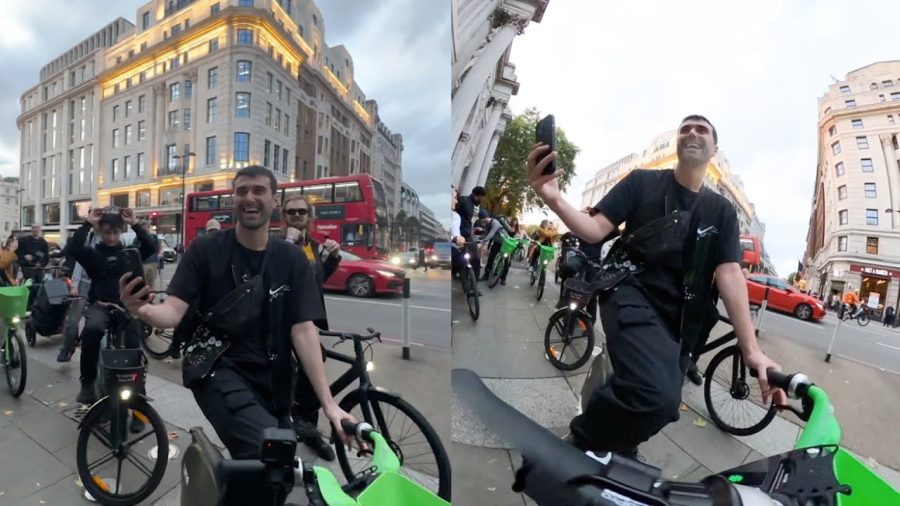 Fred Again.. With a Bike Ride Around London

Before his official album release of Actual Life 3, Fred Again.., a London-based electronic, pop, house DJ and producer, decided to go on a releasing spree in any way he could. On social media, Fred Again.. began to reach out to many different avenues for streaming his upcoming projects.

From his favorite pub in London to bars in the United States, Fred Again.. wanted to start his album release with a bang throughout the world.

One idea that Fred Again posted on Instagram, just two days before the album was supposed to be released on streaming services, was to host a bike ride around London while the sun was setting while playing songs from Actual Life 3. Fred Again.. quickly dropped a link in his Instagram of a signup sheet that closed an hour, due to a large number of responses.

The next day Fred Again.. quickly deleted all mentions of the bike ride from social media, leaving fans questioning if the event was even going to happen in the first place. However, an hour before the bike ride was intended to start at 5 PM, Fred Again.. dropped an address and a]notice for his fans to “be safe, and wear a helmet!” The bike ride was on, and people were ready.

Hundreds of people brought their bikes into the Marble Arch, quickly surrounding the park and the arch, patiently waiting for Fred Again.. to arrive. The crowd was electric. Armed with either rented, rideshare, or personal bikes, fans were ready to ride around London. About half an hour into the event, Fred Again.. quickly arrived, introduced himself, set up the speakers on the back of two bikes and told the crowd to follow him. He hopped on his bike, and began the bike ride. No one had any idea of where they were going, but they just knew they had to follow the music.

Fred Again.. and the two large speakers attached to the back of two bikes of his friends, have then begun the bike ride by going down Oxford St. One of the busiest streets in London. The crowd was focused, they all wanted to make sure they weren’t going to get lost and avoid being hit by oncoming cars and traffic as well. The bike ride began to pick up the pace, as people were biking fast to avoid cars and make sure they were still hearing the music. While going down Oxford St, you can faintly hear Fred Again’s songs being played from “Danielle (smile on my face) to Delilah (pull me out of this).” The bike ride continued down Oxford St, which then turned on Regent St to then bike down Piccadilly to reach Hyde Park Corner. This is all while hundreds of people have been dodging traffic and following the music for an hour.

The bike ride ended in Hyde Park, where Fred Again.. took out the two speakers and more to blast his album around the park. The crowd was electric, every single one of them singing the words to his songs, and bouncing up with the beat. Unfortunately, after a half hour of premiering his new album, the police began to arrive, and Fred and his entourage left quickly and smoothly.

It’s fair to say that Fred will probably do this again in the future for his releases, as he stated that biking around London is one of his favorite things to do. On the day of his album release Fred Again.. posted on Instagram how grateful he was for the event and how much of a success it was. Very similar to the success that his recent project has been receiving.