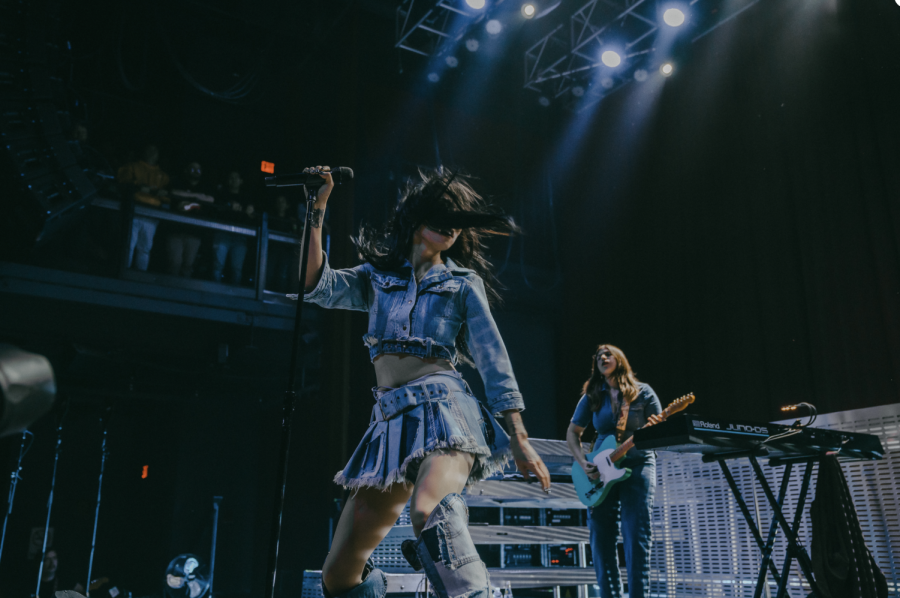 Rina Sawayama performed her Hold The Girl Tour at the Fillmore Silver Spring on November 29th. Blessing the DMV with a concert that incorporated several genres, a high-energy performance, and a show to remember. Rina started the concert off by sharing her confusion about whether or not to say “Welcome Maryland” or “Welcome DC”. Coming to the conclusion to address the crowd as the DMV area, which she poked fun at saying she should get a car while here.

The Queen of the Underground, Kotic Couture opened for Rina Sawayama and set the crowd up for the energy-packed concert. With a combination of EDM and 2010 nostalgia pop songs she truly knew how to warm up the crowd.

This concert could not be confined to just one genre. With songs ranging from rock, industrial, pop, and even country. Placing an emphasis on the music itself over what others define it as.

Diving deeper into some of the songs, “Hurricanes” was most certainly a show-stopper. A chaotically sad song describing what it feels like to be too hard on yourself. Adding even more to hearing this live was the gradual buildup of thunderstorms and rain. This accompanied by lightning-like flashing lights had the crowd jumping for the whole song.

Rina shared the heart-touching reasoning behind the creation of her Hold The Girl album. She recounts turning 30 in 2020 in the midst of the COVID-19 pandemic. This forced her to confront her emotions and childhood and eventually led her to go to therapy. Which is where she learned the importance of healing her younger child. A process that aims to confront and heal what you went through when you were younger. Placing importance on re-parenting yourself and coming to terms that you won’t always get the apology that you deserve, especially from family members. Rina shared how she felt a lot of anger about her childhood and how she was treated which is part of the reason she makes music today. Sharing that she makes music to help others heal.

This tear-jerking sentiment directly led to the performance of “Send My Love To John”.  A song encompassing the entire meaning of this album and the reason why Rina Sawayama is an artist today. This narrative-driven ballad tells the story of an immigrant mother not accepting her queer child. Played on an acoustic guitar and showcased her raw vocals leaving countless fans self-reflecting on the dancefloor.

Switching the vibes to a rage and rock concert Rina sang “STFU!”. The goal of this was to let go of all the anger she has felt. She wanted to shock people and this is how she did that. The addition of red flashing lights added to the experience of feeling the anger in the song.

This outstanding and electric concert came to conclusion with a sing-off of “This Hell”. Rina split the venue into two sides to see which could sing loudest. Taking turns singing the lines “Got my invitation to eternal damnation / Get in line, pass the wine, bitch, we’re going straight to Hell”. A perfect ending to an already interactive and memorable concert.