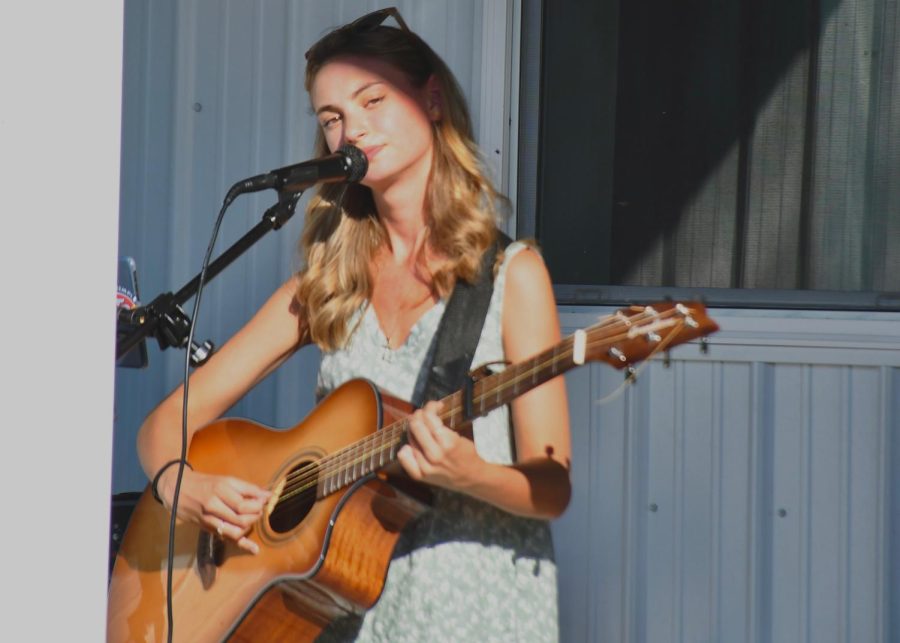 Get to know Catherine Brennan, a talented AU Freshman breaking into the music industry with the help of Second District Records.

Aidan Jacketta: Can you tell me a little bit about yourself and your music?

Catherine Brennan: So I have always been in music. My dad does music, my brother does music. So I have pretty much been singing since I was three years old. And playing piano, I started lessons when I was seven. So I did lessons for about 11 years. So I have like a lot of experience with music. And I’ve been writing since I could literally put pen to paper. Probably six or seven years old. Like I’ve always been writing music. So I’m like, finally getting an opportunity like this. I’m a singer-songwriter. Like I kind of refer to it as like, indie pop-ish. I love indie folk, and I’m aiming for that type of sound. But it just kind of is what it is like, I think. I don’t know. I want to say it’s unique, but I don’t know if it actually is I guess what, like, figure it out and see like, what people think of like my newest stuff releasing soon. Because it’ll be my debut single. So I’ll be interested.

CB: I love talking about this so much. Part of the reason why I’m so excited to release the song is not just to release it, and like get myself out there, but to talk about how I wrote it. So it’s called “Masquerade” and it’s about impostor syndrome. And at the beginning I’m talking to my anxiety, I say “you” like I reference the word “you” a lot. And I’m talking to my anxiety because I wrote it about 10 days before I was coming to move in. And I was not stressed about it until one night when I had to read the writer’s witness book. And then everything just seemed to become so real. And I was suddenly so in my head about it. And I was getting like really worked up because I also don’t want to leave my friends. And I don’t want to leave my boyfriend back home. And I didn’t want to leave, you know, like this whole sense of normalcy. And it’s such a huge move. And I mean, every single person goes through that going to college or having any big move. But the only way that I knew to kind of remedy that anxiety and deal with the imposter syndrome of do I even belong at somewhere like American was writing. So I just started writing “Masquerade”. And it just kind of snowballed into what it is. And I’m very proud of it because I think it could spark dialogue about mental health and about imposter syndrome and how prevalent it is. Because it’s something pretty much everybody goes through at some point. And so I’m really excited to actually get it out there. And kind of start these conversations and be involved in the conversations. I want to be really active with the listeners, I want it to be not just I’m releasing a song and just saying, have at it, I want it to be a very engaged discussion around it.

AJ: When you were writing the song, were you specifically going for an indie-pop or indie-folk vibe, or did you just write how you feel and then let it go from there?

CB: It was a stream of consciousness. The song was entirely me just word vomiting because I needed to get everything out of my head. Because I was so so wrapped up in every single thought that I had. Because I was very emotional during that while I was writing it. I say this multiple times to like different people but like, I kind of wrote it in the middle of an anxiety attack. So it was just kind of the product of that. And I think it reflects well because the lyrics are very one after the other. I don’t think it’s too formulaic I think it’s very much a stream of consciousness and that’s how I like to write. So I am focused more on lyrics and, I love lyricism over the actual music I mean I do love the actual music, obviously, but the lyrics are definitely at the forefront of my music.

AJ: Did you find that writing about your anxiety attack helped you get through it?

CB: 100% Oh my gosh, it helped me so much. And it’s really cool to look back on it. Because seeing how much I’ve grown in just two months of being here and reflecting on when I was writing it and how extremely anxious I was and felt like I had no business going to college. Because I also still feel like a kid like at that point. I very much did feel like a kid I still kind of feel like that but I definitely matured. But  I don’t know, just reflecting on it. And now I’m like that really helped me through the entire transition.

AJ: Before “Masquerade” have you written any songs?

CB: Yeah as I said, I’ve been writing since I was probably six or seven years old. I’ve been in a couple of competitions, I was in one in elementary school. And I ended up writing as I’ve always written about really heavy things. So I remember one of the first songs that I wrote was called “Until The Darkness Goes”. And it was inspired by the riots in Ferguson, Missouri. I was inspired by watching the news because my family always has the news on. So I was watching that. and I was just like, as a 10-year-old, I was kind of processing it. And music was kind of how I was processing it. And the song was all about I want the world to be a better place. And then I had another one similar to that, that I wrote in eighth grade about Parkland. And it was also an idealistic song about like, it was called “We Could Be”, and it was about how we need to be united. Obviously, Parkland was so impactful for the entire country, the entire world was earth-shattering. And  the way I kind of coped with it was through writing this song. And it was for a songwriting competition that I ended, I ended up getting like second place. I also wrote one for my graduation, and I performed at my graduation, and I was just kind of like reflecting on the past four years, I actually really want to get that one produced too. Because I know a lot of people loved it. My parents love it. Because it’s just like, it’s a wholesome song. I think it’s just about like, it’s called “The Best Years of Our Lives”. It’s so simple.

AJ: Could you tell me a little bit about your time and experience at the record label here at AU

CB: So that place, the record label is one of the coolest things I’ve ever done in my life. I was 100% not expecting that to happen. Like I didn’t even know it existed until I met Grace, the director of marketing through the singer-songwriter’s hub. And getting involved with that, I think I’ve like grown so much as a musician, and it probably been like a month, a month and a half, like not even that of being involved in SDR. But I’ve quickly become so close with all of these people, even the people on the e-board who are way older than me. I feel like we all have a lot in common like being in a group of musicians, people who just love and appreciate music so much. It’s so easy to just connect with them. And I feel like it’s such a great environment for creativity. It’s so easy to just be yourself with that group of people. And I’m so grateful for it because I feel like I would not be pursuing music now. And it’s because of SDR because of how welcome I feel, how supportive everybody is through everything. And they have amazing resources, like the fact that I have access to, well, I don’t have access, but like, I know people who have access to a really nice recording studio is so cool. I never thought I would have that opportunity and not have to pay hundreds of dollars for a couple of hours of session. Yeah, but those people have really become some of my closest friends. It’s so cool. I love it so much. Those people are awesome.

AJ: As a journalism major how has that impacted your music?

CB: That’s a good question. I think that it is the other way around. I think that music has impacted the way I do journalism and the way I write in that sense. Because I do have experience with journalistic writing from all the way back in high school. Which I hate mentioning that because people always judge you. But I’m a freshman. I don’t have any other experience. But I think I kind of write more poetically. I do more flowery writing, even in journalism. Because I have more experience with music and poems. And I also think the fact that most of my music is derived from personal experiences or things going on in the world. My journalism is more about human interest stories or what is going on. I mean, that’s what most journalism is but I just want to see into the minds of people. So I think music has influenced journalism, more than journalism has influenced music.

AJ: So I did a little bit of a deep dive into you and I found that you did a cover of “Stick Season” by Noah Kahan and I just wanted to hear your thoughts as a musician about his most recent album?

CB: Oh, my gosh, I actually started listening to it on the metro to Anacostia the other day. I didn’t finish it. But his music, oh my gosh his voice and his lyricism is so good. “Stick Season” is definitely my favorite. I need to listen to that whole album like actually sit down and listen to it. It’s really hard to listen to on the metro. I don’t have so many thoughts on it because I haven’t listened to the whole thing but he’s my favorite style ever.

AJ: I brought that up because Noah Kahan is more of a folk or indie folk singer and I was wondering if you get a lot of motivation or inspiration from him?

CB: Yes, definitely. On the indie folk side, I definitely love Noah Kahan and I need to listen to them more. Also Caamp, I love their music a lot. I don’t aim for that sound because it is very folksy. But I also love listening to Lizzy McAlpine. I love her lyricism and her music is so good. Her voice is beautiful. Who else? Oh, yeah, like I love Hozier Brandi Carlile because her lyricism is so good. Her storytelling is phenomenal. And that’s what I aim to do in my music too.