“This is Punk Rock time, this is what Joe Strummer trained you forÛ 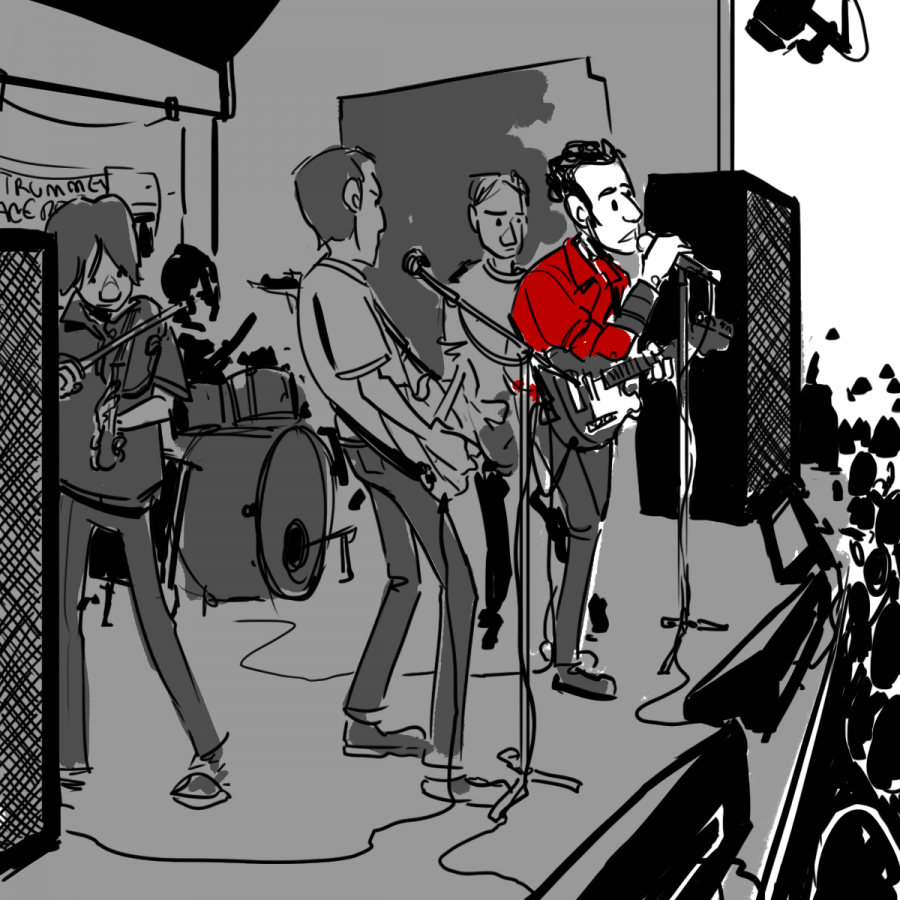 Trashcan Sam: Sellout, rich boy, and the child of a diplomat. Those are the least “punk” sounding labels I have ever heard, so why bother with Mr.Mellor? Guy’s a hippie who had a punk phase. He couldn’t play guitar, so he literally changed his name to “StrummerÛ. Years fly by, and he kicks out Mick Jones in what could be considered a punk equivalent of the Lennon-McCartney feud that killed the Beatles.

I’m comparing a punk band to the Beatles. There’s something wrong here.

Milo: Some would say that the Clash were the punk Beatles? I would think so.

Trashcan Sam: Of course you would, coming out of the woodwork as soon as someone talks garbage. You really love the Clash, don’t you? Half of your damn music library is either them or covers of them.

Milo: The problem when talking about the Clash, let alone Joe Strummer, is that people get hung up on labels. “Punk” is a vague term that deserves a separate discussion all of its own, but, for our sake, we will refer to it here as a hindrance.

It is important to realize that Joe Strummer, and the Clash, by extension, are iconoclasts of the alternative. Their music is a welding of several different genres, all of which with their own individual, sonically coherent tendencies.

With “Guns of BrixtonÛ, “Police & ThievesÛ, and “Pressure Drop” (the latter two songs being covers), they took on reggae.

“Brand New Cadillac” was an ode to 50s rock n’ roll, with sentimentally nuanced blues riffs and song structure. The subject matter, girls and cars, was the greaser oil dripping from their slicked- back hairs; and, to be blunt, they covered Buddy Holly’s “I Fought The Law” and Richard Berry’s “Louie LouieÛ. S.E. Hinton is smitten.

London Calling, as an album, is considered a staple of the post punk canon, Sandinista was awash with dub and world music, and, hell, “All The Young PunksÛ, a song off the Give ‘Em Enough Rope album, is a reference to glam rock outfit Mott the Hoople.

Previous drummer Terry Chimes would later work as a chiropractor! And maybe there’s an underground scene for that profession, who knows! Maybe that explains why he drummed with such mechanical preciseness, with little to no fills on the albums he performed on!! He’s a doctor!!!

Simonon hit canvases with paint, so why did he become a bassist??

Trashcan Sam: But Joe Strummer used to have long hair, his nickname was “WoodyÛ.

See, John Mellor, his birth name, was a child of the world. No joke, he was born in Turkey. Because elder Mellor was a British diplomat, he was required to relocate constantly, internationally. Joe Strummer, the British Punk poster-boy, would not start living in England until he was 9.

Not long after he first set foot on U.K. terrain, his older brother became a nazi. And, not much longer after that, brother Mellor killed himself.

For some musicians, traumas like a familial suicide would wound, remaining a blight in their memory. But, our protagonist, as it were, would not adhere to his misery. This is not to say that there is anything wrong with doing so, nor is this to say that Mr. Strummer did not suffer from the experience when he very much did. What I am suggesting is that he stored that in a bottle, along with the music he had encountered, the experiences of his life up until that point. Mellor was already a wayward veteran of the Bohemian archetype by the time he had hit his twenties; too young to be a hippie or Mod, older than most punks when the former gave way to the later, and, somehow, he had seen more of the world than either. With that in mind, I do not think Joe Mellor, John Strummer, “WoodyÛ, was a punk.

When the National Front flexed its brutish muscles as a political party, Joe helped form Rock Against Racism. RAR would lead a march down Trafalgar Square that bulged to 80,000 supporters toting support; British NF would cease to have any political power by the end of the seventies. Joe penned protest songs like the Sun shits fire- often. “Johnny AppleseedÛ, “White RiotÛ, “London CallingÛ. With that in mind, I do not think Joe Mellor, John Strummer, “WoodyÛ, was a punk.

Later in his life, after the Clash had broken up, Joe would act in films, provide their music scores. Joe would start festivals, perform at charity events. He always would be doing, never slowing, and never stopping his creative foot. When he died, people worldwide began to celebrate unofficial Joe Strummer Days on December 22nd, the date of his passing. People will gather around campfires, talk music, and play music. The activities are depicted in Julien Temple’s documentary The Future Is Unwritten, one of many movies about Joe ( the most recent being 2016’s London Town starring Jonathan Rhys Meyers as the Punk Rock Warlord himself ). Temple’s film includes the likes of Johnny Depp, Bono, and even Flea; such is the length of Joe’s legacy and influence. Such is the power of his words. Such is the magnitude of his life. Hell, the title of this article comes from Henry Rollins, himself a die-hard Strummer fan. And yet, with that in mind, I do not think Joe Mellor, John Strummer, “WoodyÛ, was a punk.

He was a folk hero.

A hippie in the sixties, a punk in the seventies, an actor in the 80s, a radiobroadcaster in the 90s, a musician again by the dawn of the new millennia, Joe Strummer had taken a bite out of this world and grimaced furiously in the face of what he could and couldn’t do, a bit of himself left hiding in each one of the records he produced. His growl, his scrawling scratch of a broken blues guitar personified that carved a place next to distorted guitars and snare witch projects, continues to engulf listeners who venture into his artistry. That includes me.

And should include you.
“Without people, you’re nothing. That’s my spiel.Û – Joe Strummer
My favorite Joe Strummer song: