I Never Asked for the Truth, But You Showed It to Me: A Review of Guided By Voices’ Alien Lanes, Pt.2 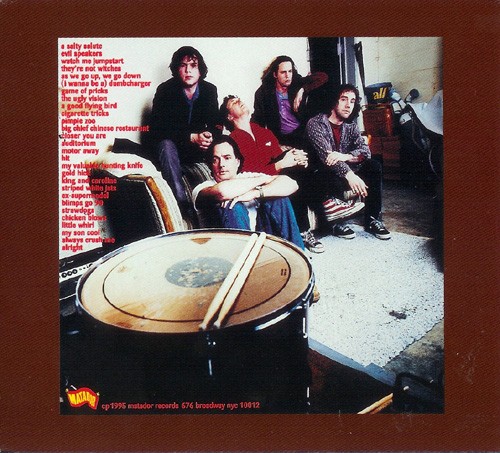 Last week, Trashcan Sam, and I, Milo, your resident hipster trash, reviewed the first 14 tracks of the Guided By Voices album Alien Lanes, my favorite out of the band’s long and winding discography. This time around, we will review the remaining tracks, as well as present you our cover of “Game of PricksÛ, the flagship song of this masterpiece. Enjoy!

Milo: “Watch Me Jumpstart” has a brother on this LP, and I think it is this song. There’s a similar chunkiness in the chord progression, but with a peculiar drum pattern by GBV standards. Both collide together in a sparkled lofi atmosphere. This is the jogging jam for the album, with every part of the composition pushing the listener to run hard and fast, to not look back. The instrumentals towards the end sounds like a determined rush into the sunset, until you, and the song itself, finally finish. Indie rock fans and adrenaline junkies have found their mutual anthems.

Trashcan Sam: The phrase “Motor Away” itself sounds forced. Just a little. And doesn’t “drive away” mean the same thing? Using both but acting as though they mean two different actions is rather redundant.

Milo: Great vocals, fun distraction. No excuse for the lyrics, though.

Trashcan Sam: Not going to bother.

Milo: The timing of the snare, the doldrum first guitar that belies the frantic, crackling second guitar, the way both merge with the bass to create this tight pocket of sound that wants to fester out; these are elements for one of my favorites on this album. It has some of the emotional power seen in “Game Of PricksÛ, though it is verbally more obtuse. This is not to say they aren’t good! In fact, this allows more relatability. The lyrics catch the clichÌ© of ownership within a relationship, the dichotomous complexity in a power dynamic. The plot goes from cheery tribute to flipped tables, then to running away, hiding from the newly abusive relationship. It is a victim penning their anxiety about such connections moving forward, and it’s a beautiful warning that deserves a multitude of listens.

Milo: The bustle of bees that this song is out to copy sound-wise claps along to the blunt intro. They’ll also remember the lyrics, “saucer-shaped coffin” itself an intriguingly alien concept that begs for further reflection after it all ends.

Milo: Slow, slinging bass lines and a rattling clean-tone guitar blanket a soft musical bed without drum pillows. Very pretty! Sounds like a storybook one reads to their child before bed.

Milo: The dank and dark riffage, ripping heavy next to bright cymbals, results in a fuzz-krieg. GBV delivers an offensive by demolition, a tough bite that kicks all kinds of ass as the track continues. Too rad to be typical alt-rock, and too complicated to be punk, this is experimental ear-candy that certainly succeeds.

Trashcan Sam: I LOVE IT! But it’s the biggest musical cocktease I have ever listened to. Piling on anticipation but sacrificing anger for coherency is like having a Christmas present thrown out for wanting it too much. Bite me, Bee Thousand drones.

Milo: GBV is popular among teens because of the avoidant outsider motif that Pollard writes about so well. “Blimps” is probably the best example of that, its title both a question and an answer. The way I imagine the story behind the song goes, a loner asks a blimp-owner, “Blimps Go 90?” and the owner replies with “Blimps Go 90Û. So, in a flash, the loner jumps in, steals the blimp, and starts into an adventure of introversion. A fiddle (violin maybe?) sings out of nowhere, the token instrument that leads the song through nonetheless intricate orchestration. Cute, refined, and chant-worthy (“where blimps go 90, you won’t find meÛ), it’s pretty good.

Milo: The cousin of “A Good Flying BirdÛ; similar lengths, lyrical simplicity, and their noises are both bright walls of strings. I think the song is meant to depict what dogs think, strangely enough? I could be misinterpreting the title, because “Strawdogs” means something else, but the lyrics accurately apply to my theory. Take a listen to understand.

Milo: Everything about this one is sad. The effects applied to Pollard’s voice remind me of a windshield wiper in the rain, the inside of the car booming with a musky, disjointed drum and a sorrow-stained guitar. Even the background vocals moan with a parodic, slow doo-wop, ringing chaotic with a tedious tenor tornado to create GBS’s most depressing ditty.

Trashcan Sam: “Disjointed” is right, “chaotic” more so. The background vocals don’t seem to understand how to exist, appearing here, there, background, foreground, wherever they please.

Milo: Standard composition with the new, playfully nasal and youthful singing really allows this song to live up to its name. We have a “little whirl” on the GBV formula.

Trashcan Sam: FIDLAR and The Strokes started a super-group, it recorded one single, this is it, it sucked, the end, goodbye.

Milo: A melodic meteor storm, the beat goes from thrashing one second to Beatles the next. Meanwhile, the guitar stands in the middle of either style, a thick coating for the drums as they surge. A tasty tune!

Trashcan Sam: Quantity over quality is the GBV quota.

Milo: I have no idea if those are strings I am hearing, but it doesn’t really matter. Paired with the saucy nihilism of Pollardisms, sarcastic and all, this is the most antagonistic song on the entire album. “Crush Me” takes no damn prisoners, sucking listeners into a vortex of knife-sharp instrumentation, and even sharper accusations from Bob (“And you are such a daredevil, and you are such a collectorÛ). The effects applied to his vocals elaborate on his feelings towards the words he recites, the first variant drawing you in by appearing in only one corner of the sound. The second is more centralized and focused, seeking to deliver the message. The third is an exhaustive cry, going out for the count to allow the din an increase in pace and volume, until the anxiety has overrun you as it does Pollard.

Trashcan Sam: DO NOT LISTEN TO YOUR MUSIC FULL BLAST WHEN YOU HAVE THIS SONG IN YOUR LIBRARY. THIS IS A WARNING, YOUR EARS WILL THANK ME LATER.

Milo: Aware that it is the last song on the album, “Alright” just says “alrightÛ. It goes with the flow, not looking to be wild, preferring to rather be a good n’ easygoing guitar jam, a chill farewell. Pickled Powerpop! Thank you, GBV. And thanks for the rest of the album, too.

Trashcan Sam: Of course this song, this album, ends with Pollard rambling on about nothing. Man’s an egomaniacal drunkard, what else would you expect?

Anyway, that was our review!

Listen to my cover of “Game Of Pricks” here:

Oh, and if you want to follow me on Soundcloud, you can do that, too!