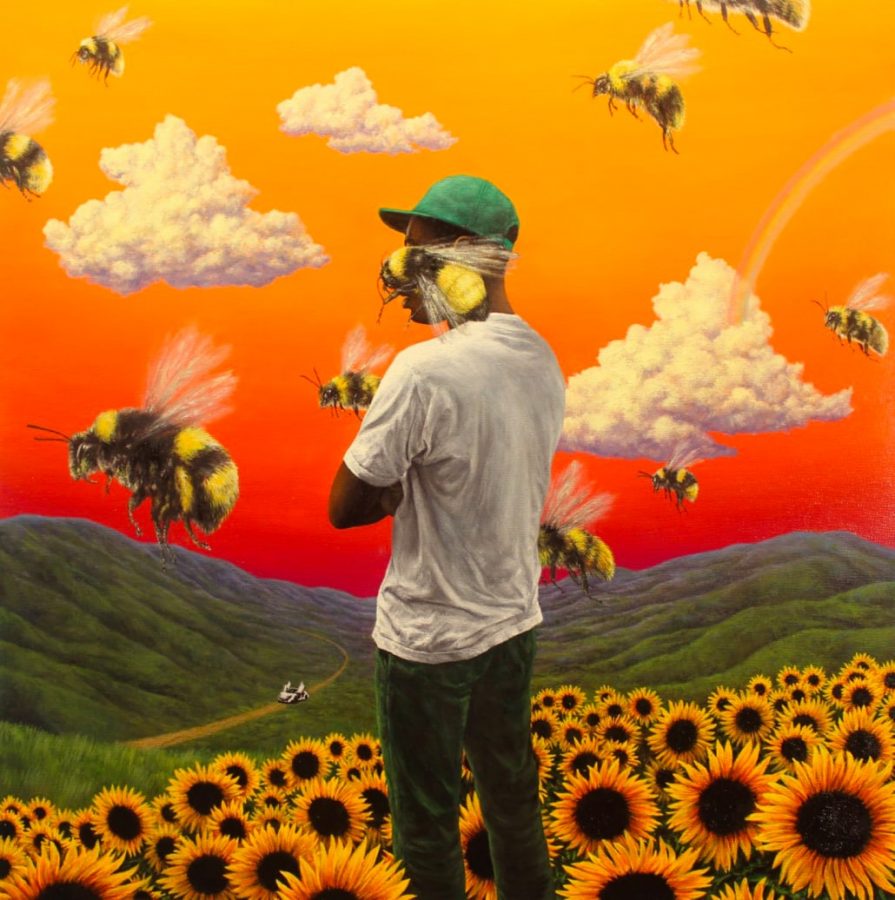 After years of wallowing in transgressive lyricism and Pharrell-lite production, Flower Boy finally sees Tyler, the Creator shed his juvenile Odd Future persona to reflect on his faults with a newfound sincerity.

The Odd Future diaspora was a long time coming, marked by warning signs in theВ form of feuds,В factions, and solo albums. From the hip hop collectiveВ‰’s ashes rose a cohort of seasoned musicians who slowly shed their edgelord trappings in favor of becoming вЂњseriousВ‰вЂќ artists. Some did this with easeвЂ”teenage prodigy Earl Sweatshirt literally grew up, opting to funnel his densely packed cadences through candid explorations ofВ insecurity rather than smugВ horrorcore; The Internet never shared their cohortВ‰’s proclivity for controversy asВ they moved forward, simultaneously launching the solo careers of Syd, Steve Lacy, and Matt Martians; likewise, Frank Ocean always had a mature and expressive approach to songwriting, allowing for a smooth transition into stardom as his ambition grew from self-releasedВ Tumblr mixtape toВ multimedia concept album.

The big question had always been, вЂњWhen would Tyler make the jump?В‰вЂќ OFWGKTAВ‰’s resident Johnny Rotten released Cherry Bomb in 2015 toВ mixed reviews, many of which consisted of the same complaints lodged at Tyler since hisВ debut album. His acerbic wit was no longer in and of itself compelling on songs that still contained traces ofВ misogyny andВ homophobia (though markedly less so than his previous albums). The production, though often compelling, was too sporadic, with individual tracks often containing several unrelated genre exercises. It’sВ Yeezus meetsВ The Stooges meetsВ Everybody Loves The Sunshine: a neat thought exercise that doesnВ‰’t necessarily yield compelling results.
Such is the Tyler dilemma; could his kaleidoscopic creativity and borderline obnoxious ambition ever be constrained to a cohesive album without sacrificing his charisma? Could he clean up his act while maintaining his appeal? Flower Boy came along to answer these questions with a resounding yes. For the first time in his career, Tyler allows self-reflection to permeate his lyricism for more than a throwaway line. He opens the album with вЂњForewordВ‰Г›Вќ, which immediately confronts the unsustainably manic energy of his career: вЂњHow many cars can I buy В‰til I run out of drive? / How much drive can I have В‰til I run out of road?В‰вЂќ On previous albums, there was an unspoken acknowledgment that TylerВ‰’s creativity and ambition were enough to excuse his inconsistent output and caustic behavior. Here, in an unprecedented stroke of maturity, he begins to accept that his actions have consequences; what if his teenage antics define his legacy more than his music does?

The majority of the album can be viewed through this lens. вЂњForewordВ‰вЂќ goes on to thank the girls Tyler so often disparages in his lyrics for вЂњtrying their hardest to keep [his] head on straightВ‰Г›Вќ, while on вЂњWhere This Flower BloomsВ‰вЂќ he says to вЂњtell these black kids they could be who they areВ‰Г›Вќ. Both tracks feature career-best production from Tyler, with sweeping string orchestrations seamlessly interwoven with vintage soul keys and palm muted wah guitars. вЂњI AinВ‰’t Got Time!В‰вЂќ contains the much buzzed-about lyric, вЂњI been kissinВ‰’ white boys since 2004В‰Г›Вќ, and вЂњGarden ShedВ‰вЂќ employs less than subtle metaphor to depict TylerВ‰’s struggle coming to terms with his sexuality.

But to get hung up on speculation and tabloid fodder does a disservice to the album Tyler has painstakingly crafted. Clearly, this is not easy subject matter for him to talk aboutвЂ”his guttural, vocal fry flow is even more clenched than usualвЂ”but Tyler has nonetheless made an album of honest confessions and sincere self-reflection. Even the singles turn the lens inward as he tries to reconcile our perception of Tyler with his intentions as the Creator. On вЂњ911 / Mr. LonelyВ‰Г›Вќ, he raps, вЂњI say the loudest in the room is prolly the loneliest one in the room / WritinВ‰’ songs about these people who do not exist, heВ‰’s such a fuckinВ‰’ phonyВ‰Г›Вќ. Although he has yet to ever really atone for the [hateful rhetoric] he has used in the past, itВ‰’s worth nothing that he seems to be making a concerted effort to move forward. He couches these self-critical thoughts in cohesive, layered productions; PharrellВ‰’s influence is still clearly present, complemented by traces of Stevie Wonder and Roy Ayers, but Tyler develops his own sound more than ever before. BastardВ‰s subversive solo piano chord progressions are paired with abrasive Goblin-era synths,В slinky Steve Lacy guitar andВ Dilla-esque 808 beats. Tyler has always had a diverse range of sonic influences, but more than ever before, he brings them together on Flower Boy to form an individual sound.

On the late-album gem вЂњNovemberВ‰Г›Вќ, he explicitly confronts the existential crisis driving this record: вЂњWhat if my music too weird for the masses / and IВ‰’m only known for tweets more than beats?В‰вЂќ ItВ‰’s a valid question, and a terrifying one to ask on your fifth album. For someone as polarizing and stubborn as Tyler, evolving as an artist is not an easy proposition. The Odd Future collective first gained popularity for their transgressive subject matter and singular artistic vision; now, nearly ten years later, the band has split up and moved on to remarkable individual success. How does the ringleader of an inflammatory LA skate punk crew grow up and evolve without abandoning the vision that first brought him success? Can a Tyler, the Creator record ever merit the stature and praise of a Frank Ocean record? With Flower Boy, Tyler postures himself as a вЂњseriousВ‰вЂќ artist on par with the best of his collaborators and peers, without ever sacrificing the idiosyncratic Odd Future charm that made him a household name in the first place. The record marks not only a high point in his career, but in the music of 2017. He rocks, he rolls, he blooms, he glows.
Delete Image
Align Left
Align Center
Align Right
Align Left
Align Center
Delete Heading