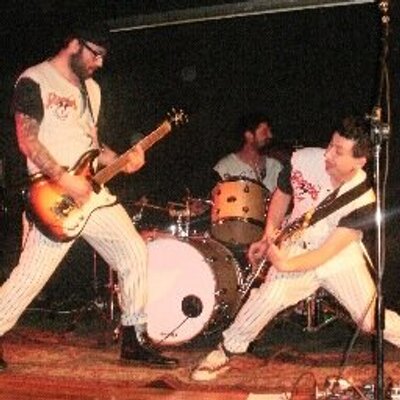 There’s a band from Italy that I fell in love with during the heights of my high school years. Hailing from Italy, the band SNIPERDOGS, adorned in baseball team outfits for a thematic reason that can’t seem to cross the language barrier, developed their own version of the standard punk rock formula that I believe should be looked into more by their contemporaries. This article doesn’t pertain much to the band itself, but rather the genre that the band attempted to establish: Trog n’ Roll.

Essentially, based on the possibly now defunct band’s account, this idea stemmed from each member’s mutual love of hard rock virtuosos as well as the “genuine/personal over commercial” virtues inherent in the punk genre. They wanted that advanced and capable hard work sound, but with the volatility of punk that made the latter appeal so much to the band. There were going to be riffs in this project, but they were “coming from the heart” as it were. Guitars wouldn’t be as distorted or fuzzy as, say, the Clash’s in their early days; the beat wouldn’t be joined by the advanced drum rolls of The Who or AC/DC.

Unaware of this, listening to the SNIPERDOGS is certainly an abrasive experience. Somehow, someway, the band has accomplished instilling the ethos of their invented genre into their product. Take, for example, the song “Supercharged ’69 Camaro BluesÛ:

This work reveals the meaning of “TrogÛ, I think- it refers to troglodytes, cavemen. It is not simplistic instrumentals that matter, but rather the passion and ferocity derived from their performances that equate to the barbarism and violence we believe were commonplace among the circles of our ancestors. Rawness, power, the sense of fully throwing oneself to the noise; while balance can be found in the standard tuneage or the blues scales, this wild card stance towards these time-tested and respected traditions found in guitar music seems to shake walls, physically and aesthetically. Trog n’ Roll is too competent to be punk, and too disorganized to be hard rock. Yet, it is as much, if not more, an audial blitzkrieg as either two genres combined. The two genres with the most dogma and disinterest in evolution than any other, the ones spouting personal legitimacy against the backdrop of wah-wah pedal enthusiast prog bands, are dismembered and reassembled in SNIPERDOGS into the truest form of rock I think there can be. This is why SNIPERDOGS should be more well-known, for one thing. But, to go along with that, it is why Trog n’ Roll should be seen by the masses; whether to spread influence or simply for the sake of listening.