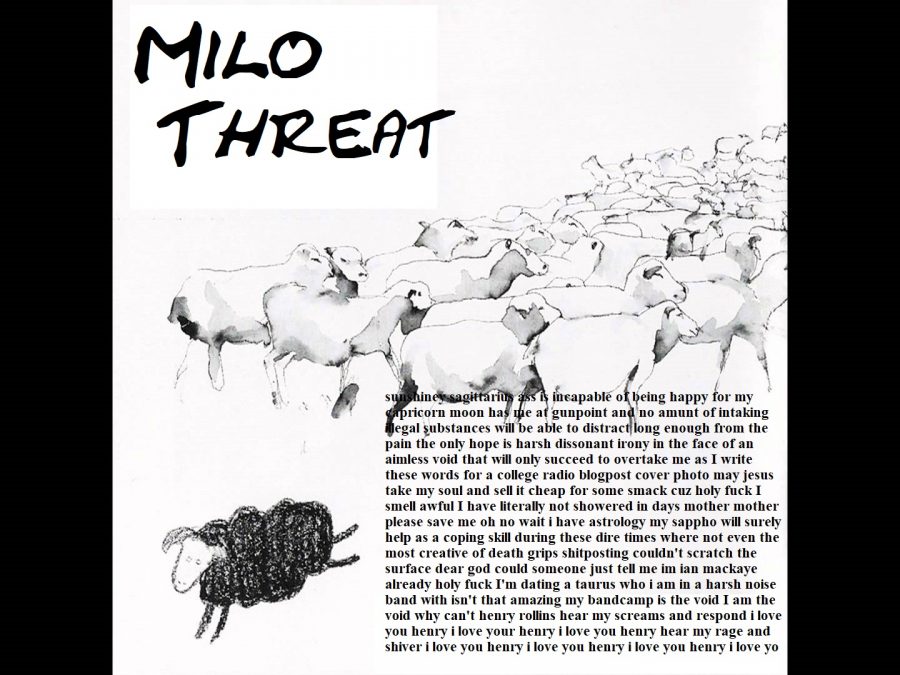 Do mind your head and watch your step!

Not going to lie, you’re really probably more than likely being given the shit end of a stick right now. This could be the literal case or your personal psychosis telling you what you actually want to be the case, but you are nonetheless being pummeled by some majorly intrusive thoughts these days (and weeks. And months. Do you people ever calm down?). Considering how you lot are compared to other fire signs, I’m certain you are riding on the horse’s neck of your problems and wanting a death-battle chant to go along with your suede anxiety and faux-leather desire to self-destruct, so my musical recommendation for you is FIDLAR’s song “Bad HabitsÛ. This is a ditty full of hot guitars basking in a summery desperado get-up, proud of self-destruction and ready for the adrenaline rush of the pre-mortem flashbacks that you’re about to have as you take those next 50 milligrams of Ritalin and have a heart attack in your dad’s shitty Ford, accidently aiming your truck into the doors of the venue you were about to puke outside of anyway due to stress. God willing, there was puke there already.

You’re going to get stoner metal. I don’t know what the fuck else you expect when the first day of your sign is 4/20 and the half of you collect grinders like they were vinyls (when you aren’t busy losing them, at least). This week will present your moo-cow sensibilities and speed with the clamor known only to fire signs as every second of their lives, so I don’t think I could give you anything that didn’t sound like a bull loudly dying during bad coitus. Then again, I can’t just give you ASMR of what you do already in your spare time, so I think you should listen to Brant Bjork and the Low Desert Punk Band’s “Controllers DestroyedÛ. You’re gonna need some sensory semblance of your sloth nature against the abrasiveness of these next few days.

For the kiddo who says they have everything they’d ever need but in reality have little to none of it; for the kiddo who is handing everyone else advice while they’re palming their fifth glass of chardonnay and busy downing their cousin’s cheese cabinet like it were a quest concerned with life or death itself; I’m going to give you some Nyquil and bid you beddy-bye. If you want music, then you can have music- just, please. Sleep. Take a nap. Avoid people. You really don’t need this right now. Listen to Titus Andronicus’ “Ecce HomoÛ. Maybe some nasally anal singing will go well with your red wine, maybe it won’t. Live. Breathe. Someone loves you.

Five seconds ago, we were laughing about the audacity of your father believing in moralistic anarchism, and now the tension in this room is thicker than the morning ego you carry on the way to work in the morning. Yes, I had said Max Stirner was a bit of a dickhead- but now I’m getting all dick from you and none of your head. No, I do not care about how that sounded, I know it was saucy. Yes, I believe in astrology a little bit. No, I’m not trading my Docs for your vans just so the rest of the scene will finally think you’re valid. When you leave I’m more than a little likely going to go to sleep because I’m not going to stand for your 1 A.M. neuroticisms and forced comradery, you are going to get nothing until I wake up. Chumbawamba, Tubthumbing.

If you were a nation, you’d be a nationalist. Recently, the concrete belief that you’re bigger than the Beatles, bigger than God thusly, is affecting your social life. Don’t let that get you down, buddy! They must be all wrong. The therapist, your classmates, the Lego town you built as a replica of your neighborhood that you have complete control over. They couldn’t know for the life of them how “unhealthy” your self-interest is, poor them. Of course, the spite is still stressing you out. So go out, buddy! You’re a winner! When the bartender cards you at the show and you get pissed over it, know you’re completely valid in your anger. How could you, a 19 year old, possibly look younger than a 21 year old? The cruelty, the absolute evil of that action- you look at least 23. You’re so punk, you listen to Blink 182. Everyone’s a poser, except for you! You know what punk is! Yay you! Everyone should know that the poppier punk is a counter-counterculture in-and-of-itself, it’s fighting those joykilling punx that want to actually change anything. What fucking party-poopers. So what if your girlfriend is in middle school? It’s true love, posers. What’s My Age Again?

Do you ever wonder why people are surprised you like punk? You have your life tailor-made for you, you somehow manage to do whatever you want and still be loved. You are Patrick Bateman with a banjo, and nobody is going to get in the way of you seeing AJJ at the venue. It ends at 12, and the job starts an hour afterwards. Lucky you (or was this planned in the first place?), the venue is a 10 minute walk from your office building. What are you doing in that office building? Nobody knows, and nobody should be asking. They’d know better. How about listening to The Germs’ “We Must BleedÛ? It’s maybe… what, two, no, maybe three steps away from Charles Manson? Walk hard, you scary, scary bastard.

You know the names of every song and every band ever conceived, and yet you manage to nitpick yourself into a musical hole so deep that your entire music library will either be Unkle Adams or Radiohead. Having achieved God-tier punk-age, reversion to step one of your journey was, is, and always will be what lies in the road ahead. I’m not going to give you a song because you’ve probably already read the liner notes on the album it appeared on and decided you knew everything about the song without ever actually listening to it. Have fun, space guru.

Moshing with an upper torso tornado and fucking roadrunner legs makes for quite the stunning performance as you lead the front row while simultaneously shitting all over ska-punk on facebook. Were it any other sign, they would be perceived as deistic. No, Scorpio’s just fucking pissed. They just do that. You just do that. Nobody ever has good taste, and you admit that that includes you with the sincerity of an annoyed carnivore staring at a leaf. You would never eat that leaf, you have standards. Remember that when you black out tonight. While you do that, listen to Oasis’s “Champagne SupernovaÛ! You should’ve gotten “Black Hole SunÛ, but I really don’t want to deal with your spite right now? So just let me stroke your ego.

Whether it’s the industrial metal you keep riffing about every time we hangout or the fact you’re GOING to get wasted before, during, or after the show, or literally all the time regardless if there is a show, it leads me to believe you MUST have feelings. You know- the occasionally hot feeling that pops up in your chest you don’t like? The thing that you will always starve attention-wise unless you’re feeling a little more suicidal than usual, and the black metal might just be doing its thing. Capricorn, you are better than Varg. Mercury in retrograde doesn’t mean you have to die right now! I’m going to give you the happiest song I know, Capricorn. Live.

You smug, turtleneck-wearing beatniks. The most intense partiers I have ever encountered while also hating most fun, you astonish me.You have a stick up your ass but you are also kinky, so you’re going to keep that stick up there, aren’t you? The SchrÌ¦dinger’s cat of subculture, you are going to hang with the friends that manage the punk clubs while never going out to see shows at said clubs. With the rod of power within your grasp, you will do nothing with it in your permanent state of sedated. Why not let your “Small Red Boy” (by AJJ) out? You could use a break.