Joy Division is in Everything 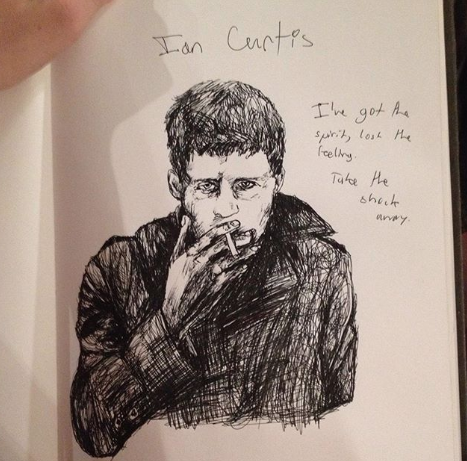 I really like Joy Division. Like, really, really like Joy Division. You’d think a short-lived band from Manchester fronted by the wiriest David Bowie fan of the decade would have caused the briefest of murmurs at best—but no, it’s the exact opposite of what anyone, even Joy Division themselves, could’ve predicted. Armed with vindictive gloom and a sweet tooth for dissonance, Joy Division scorched the musical landscape of the Late 70s/early 80s, sucking out all the rancidity that post-punk could’ve had and arising a monolith in their wake to sate the wet ears of a baby-faced Bono. Unknown Pleasures was a triumphant debut album as well as the last real snipe at artistic endeavor from frontman Ian Curtis, a depressed soul whose life had been spiraling into disrepair as the onset of his epilepsy mingled with his rise to fame. Mr. Curtis would take his life not long after the album came out, leaving his band with a handful of previously recorded vocals to work with as they tried to produce another album under the Joy Division name. And while Closer was in every way just as good as their previous work, one could tell that working with the dead was a touch too much Siouxsie and The Banshees and touch too little Bernard Sumner, the impromptu leader of the surviving members. Realizing that continuing as Joy Division would be a fruitless effort as well as a kick at the tombstone of their recently deceased friend, Sumner surmised that a new sound should be considered, a new direction… a “new order” to follow the “new wave” of music that was growing in popularity as post-punk slid into the goth-rock abyss, never to be seen again (at least, not in the mold Joy Division brought forward).

The plight of Ian Curtis and Joy Division is something that hits home for me to some degree. Music aside, much of what plagued Mr. Curtis in his personal life also occupies mine, even if only in a limited way. As far as my own examples go, I myself found out about my Conversion Disorder a few years ago when a string of violent and uncontrollable spasms started affecting both my academic career and my life overall, worsening my already caustic depression. And, only a short while after making peace with my problem, my twin then developed his epilepsy and was faced with the very unfortunate reality that he could be seriously injured or straight-up die were he not careful. Then there’s the constant stress and fear, the poetry leaking out like a gouged wound, and the sinking feeling that your art can and will not save you. These latter symptoms are, admittedly, merely speculative, and we may never fully grasp what was going on in Ian Curtis’ mind when he made his decisions; as we can with nobody. But, the music we got from Ian during his tenure as Joy Division’s main songwriter might speak for him just enough for us to have an inkling of understanding, through his words and the sounds shimmering like phantasmagoria seeping out the threshold of his mind to ours. The power and influence of Joy Division, after all, is derived not in theorizing what could’ve been done to save Ian, but rather in facing what internal darkness we may share with him. To put a voice to the void we are facing, like a stop sign over some dreadful-looking drop, and to have, for a moment, a conversation with it.

I say Joy Division is in everything because anyone who has grappled with their darkness can find solace in their music. The home that’s been built is dark and out of reach from sunlight, but it is a home and it has beds to share. The floors are wet with sweat and tears, the ceiling hangs low and is made of glass, and the walls are soundproofed so as to keep you in this space, focused. Joy Division exerts this heavy atmosphere like a cold silent rain, soaking you entirely as you listen and leaving you unable to go to anything else for sonic satisfaction. There’s such a thing as a “Joy Division mood”…and I would know, I have them all the time. For a band to be able to have that effect on people is extraordinary and not often seen elsewhere, so it is understandable why some bands would like an inch of frosting of their cake.

I look to bands like Gang of Four and notice the bass work, how it is every bit as important as the guitar and even more intricate in its tablature. Yes, Gang of Four does not sound like Joy Division on the surface (Shut up, Colleen) but there’s a kinship in the instrumentation. I then look to The National, a post-punk revival band that channels the post-punk aesthetic through very different means when compared to Joy Division. Even so, I am still confused when people say there isn’t even a hint of their influence in The National’s music. Matt Berninger and Ian Curtis are both stalwart baritones that capture negative emotion in the way that only post-punk can; Bryan Devendorf is in every way as much as deceptively simple drummer as Stephen Morris, their techniques both serving the sound as a shuttering anchor for the tinny guitar noodling. Similar can be said for U2’s Larry Mullen and The Edge, two members of one the most famous bands in the world whose parts in song like “Sunday Bloody Sunday” are like cleaner and poppier impressions of Bernand Sumner’s guitar and Morris’ drumming. And, surprise surprise, each of these bands have members that admit in interviews that they listen to the big JD, and, AND, I’m looking at only post-punk bands right now. Kurt Cobain called himself a fan, The Wombats have a song called “Let’s Dance to Joy Division”, Radiohead has recorded a JD cover, etc etc, and the list goes on. It’s easy to say that the pop music’s biggest names’ liking of Joy Division is coincidence, but when DANNY BROWN and NEUROSIS like them too, then you have to admit you’re wrong. And you, person who thinks that, are wrong. Joy Division is in everything.