Playlists and genre: a benefit or a harm to exploration 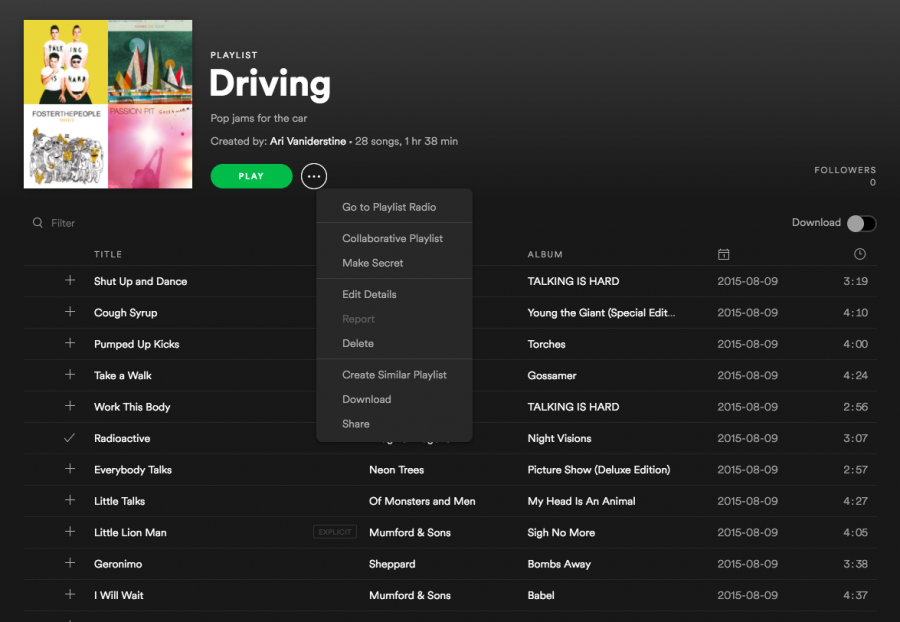 Up until about a year ago, I didn’t use any music streaming services. I bought the music I thought I wanted. This led me down a path where I was only really listening to the popular acts and I was only listening to their popular songs. I had Nirvana’s Nevermind and loved it but worried that I might waste money getting Insecticide. I had Led Zeppelin through Led Zeppelin IV but had reservations about buying albums that weren’t as iconic. (Ironically, my favorite Zeppelin album is Physical Graffiti). I saw albums that had been deemed iconic and influential as a safe investment; they were something that I thought that I would most likely enjoy. While this method built my love for the classics, it was not feeding my desire to be challenged by something new in the slightest. I wanted exploration.

Once I got Spotify, there was nothing but room for exploration. One of the first ways I was able to explore was in the form of playlists. Whether created by Spotify or by other users, playlists were something I found to be great tools to quickly intake and familiarize oneself with an artist or genre. They were a sort of sonic smorgasbord to whet your appetite for a new style. And they worked. These playlists enabled me to find so many artists that I would have never found in my old method of music exploration. Because of the free range nature of listening on streaming services, I was able to really sink my teeth into bands that were comparatively more out there like toe, Pinegrove, The Physics House Band, or Little Tybee. Playlists were also a great organizational tool. I’d make playlists for each genre and sort what I found accordingly. All of the sudden, I had all these playlists of jazz, funk, hip hop, punk, and other genres of music that I could enjoy.

However, something felt off. I still felt like I wasn’t having the fullest musical experience that I could. What I had essentially was about a dozen playlists of songs that were superficially linked by the idea of common genre. Was it possible that my method of search was so half baked that I was getting half-baked results?

The idea of genres is such a strange one to me. It’s understandable that we need some way of organizing the countless hours of music that have been recorded and distributed over the years, but that’s not the basis of my objection. Within each and every major genre is a wide array of different artists and these artists have their own life stories that got them to where they are. Grouping artists together because of similar instrument choice as well as other criteria is potentially ridiculous. For example, listen to these two songs: Glenn Miller’s “American Patrol” and Thelonious Monk’s “Bemsha Swing”.

The similarities between these songs is superficial at best. Miller’s piece is for the most part, written out and planned. It’s very organized and symmetrical. It’s also extremely catchy. This is one of my favorite tunes. Part of the reason I love it so much is that you can sing along to every bit of it. The same cannot be said for Monk’s “Bemsha Swing” and that isn’t necessarily a bad thing. Once the solos come in, there’s nothing catchy about the song. This piece is a lot more spacey and improvised. Glenn Miller and Thelonious Monk are both labeled jazz musicians, yet these two couldn’t be more different.

This realization made me rethink how I search for music, and what I was hoping to find. Now, I use playlists much less. I may scroll through them just to find new names but that’s about it. Once I find an artist that sparks my interest, I try to listen to their full albums, as many as I can find. I think that this method gives me a much fuller sense of what the artist is doing. When I hear songs in their greater context, I can appreciate more about them. For example, consider The Who’s Tommy. There are songs that are great just by themselves, my favorite being “Christmas”.

When placed in the full context of the album, this song has so much more impact. The outside world, with the exception of his mother, thinks that Tommy’s consciousness is lost forever in the “eternal grave”. However, this is not the case, and this is shown in his recurring soliloquy: “See me, feel me, touch me, heal me”. When you hear just one song, the importance of these story arcs is curtailed. Tommy’s soliloquy is a cry for help that should stab listeners with a sense of pity and heartache. Once Tommy is freed, his soliloquy is followed by another: “Listening to you, I get the music. Gazing at you, I get the heat. Following you, I climb the mountains. I get excitement at your feet.” This new addition is a relief and a triumphant celebration of life. While experiencing this, I am filled with a cathartic feeling of victory. This feeling of mine would have never occurred had I heard just the one song along with other songs in the rock genre.

This isn’t to say that genres and playlists don’t have a place in the world. Of course, they do. In a historical sense, organizing artists into genres makes perfect sense. Instead of having to talk about Charlie Parker’s story and Bud Powell’s story and Max Roach’s story, all of those can be compiled to recount the Bebop movement. And my ideas about listening to songs within the full context of their albums work outside of rock operas. Of course, it’ll work in that context because rock operas or just concept albums in general convey their intended messages as a full unit.

Also, this isn’t a rule, its merely my preference as well as a suggestion. If you want to try it out, try this. Below is Wayne Shorter’s 1965 album JuJu. While the entire album can be labeled as modal jazz or post-bop, each song is very different from one another. The chaos of the opening track is turned serene in the next. Each song gives the listener a deeper understanding of what the genre is and can be. Try it out.