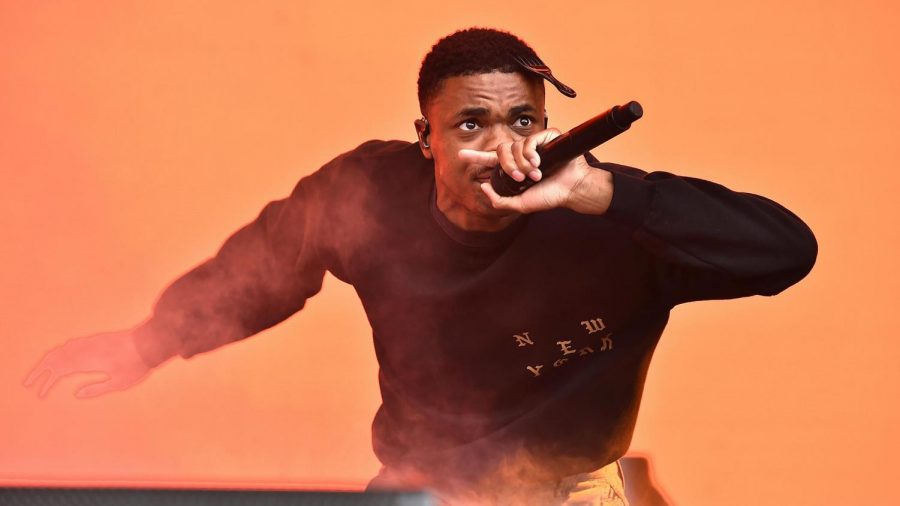 I would consider myself fairly well versed in jazz and rock, both as a listener and as a musician. Using my knowledge and experience I can analyze a performance from each of these styles and talk about the achievements and shortcomings of that performance. I’ve also experienced performances of genres that were new to me, yet I knew that they were amazing. This is exactly what happened a few nights ago.

This weekend a few friends and I went to see Vince Staples at the 9:30 Club. I don’t know his music very well, but my friends’ excitement had convinced me to buy tickets to join them. I went in not really knowing what to expect but I was intrigued and ready for the adventure. By the time Armani White, the first opening act, was finished I was hooked. He was able to get a crowd hyped in a way I’ve never seen an opener do before. This hype only intensified by the time the second performer, Buddy, finished. Buddy’s set was also incredible. Most of his songs were full of aggression, which pulled the audience in even more. When he walked off stage, the crowd was fully energized. And that’s when it got real.

Smoke machines on either side of the stage began to work their magic. As the cloud of fog grew, various lights illuminated the mist. Every fan looked for the slightest shadow within the cloud to indicate his arrival. As the music started, the anticipation in the crowd was intoxicating. At the drop, it seemed as if the mist was cleared away in a second, and there he was. Immediately going right into “Feels Like Summer” there was no settling-in moment, the set was in full swing right from the get-go.

Staples’ command of the stage was something I had never seen before. Most artists I’ve seen before will stop the flow of the concert a few songs in with a little conversational friction. They’ll ask how the crowd is doing, say how it’s so great to be back in (insert city name here) and maybe tell an anecdote about life on the road. While these interactions can enjoyable, relatable, and humanizing, they also can muddle the direction of the performance. Typically, characters in movies won’t turn to the camera twelve minutes in a say, “Hey everyone! Welcome to this movie, we’re glad you could make it, we’re going do some more plot and maybe some character development, enjoy!”

Just as that might diminish the flow of a movie, any sort of commonplace chatter in between songs can also belittle a show. Without it, one can really be surrounded in the force that is at hand. A wild storm does not stop to ask you how your day is doing. Vince’s interaction with the audience or lack thereof allowed an overwhelming force, similar to a wild storm, to take over. It was all about the music. He knew it. We knew it. There was no reason to waste time with elevator small talk. His departure from this convention was extremely refreshing. Everyone at the show was experiencing an event, one bigger than any performer or audience member. After a particularly intense song, filled with crowd surfing and moshing, Staples told the audience very quickly that it was only getting more insane from here, and that if we couldn’t handle it, we should “go home.” And so, the crowd responded, cranking the hype to 11 for the rest of the set, ending with “Yea Right.”

After his last song, Staples had a brief but genuine heart-to-heart with the crowd. Since he had refused to have any of these moments the whole night, the crowd knew that this was important. He spent a few moments talking about the late Mac Miller, one of his collaborators and one of his closest friends in the industry. After he finished, he walked off stage and the screen in the backdrop lit up. Staples chose to end his set by paying tribute to his friend by playing Miller’s entire NPR Tiny Desk performance, which originally came out a month before the artists death. It was truly a touching experience for the crowd, many of them undoubtedly fans of Miller’s.

After heading home, I thought a lot about the night I just had. This was one of the best shows I had ever been to. The night was full of powerful highs such as being sloshed around a bouncing crowd like I was a sock in a dryer. The night also ended on such a different note, a solemn mourning of a dear friend and inspiration. This massive mood change made the whole experience so much more three dimensional. It wasn’t just one meaningless banger after the other. It became a celebration of life and vitality. Regardless of my knowledge of the genre or his music, this performance by Vince Staples is going down as one of the best shows I’ve seen.