Who the Hell is Mike Krol and Where Has He Been My Whole Life? 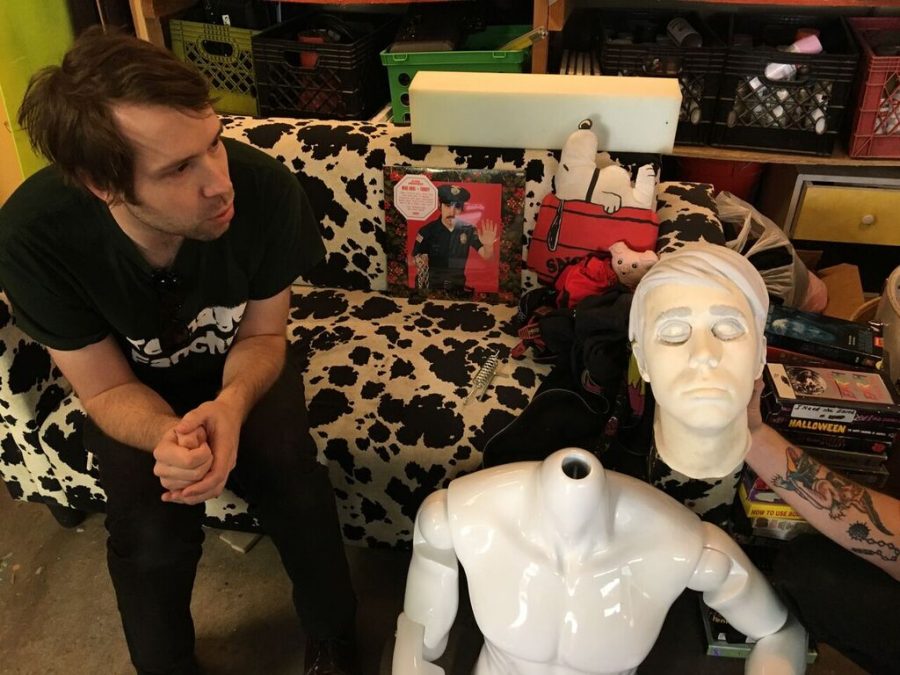 (First of all, go play Monster Prom. Stop reading this article, play one round of that game, and then come back. You’ll thank me later.)

Anyway, if you’ve followed my instructions, there’s a chance you heard the song “15 Minutes” by Mike Krol playing through Monster Prom’s end credits, minding that you had to play the original game without the current DLC. What were you met with? What did you think? What did you hear?

I sensed it was different back when I first heard it. This isn’t to say I thought it was good, not yet at least, but I knew there was something strange and enticing to Krol’s style. The man and his music seem to function in much the same way as a serial killer with his warning note to the police, obliging their respective figures of authority with a hodgepodge of pop culture influences and stapled-on questionable motives. The deranged maniac would have cut from separate magazines for each letter of every word to have his note; Krol draws from what feels like a hugely extensive understanding and interest in music.

At bare minimum we can know that both killer and musician want to get their point across. Krol often writes lyrics that are very blatantly about his wanting us to enjoy his sound, and his instrumentation is sometimes simple to the point that it feels forced and on-purpose. There’s a nervous energy tacked onto each song, an unspoken but nonetheless very present fear of coming off as experimental in any way. Krol is attempting to create pop rock even when his persona VERY definitely suggests that he is in every way a tortured artist in the worst sense of the phrase. Unshakable agony accompanies his every howl, and listening to his music is like watching a train-wreck. Thing is— and this is why I love him—I think that’s what he wants.

On the surface you can see that Mike Krol loves guitar-based music of all shapes and forms. The way he places sound within the musical landscape suggests Jay Reatard and the way he structures his music is Ramones. He wears leather, he wears shades. He writes about teenie-pop drama. Still, the man’s a goddamn enigma. In the description of his first album on bandcamp, a bash from start to finish named I Hate Jazz, it literally reads “This album was recorded during the worst week of Mike Krol’s life.”

To quote Randy Feltface: “HOW DO I RESPOND TO THAT?”

The occurrence of similar in the descriptions of his other albums up there offers clues and little else. Doing some research for my hunches, I found that Mike Krol is likely a very anxious human being in his private life and, while that’s wholly his own business and none of mine, I can at least feel that there’s something that this man is trying to tell us. But, not in a way that can be fully discerned. There’s undeniably a man separate from the music, but there’s a whole lotta grey making it hard to distinguish between the two. Again, I think this is what he wants. I theorize that Mike Krol is rock’s first attempt at looking at itself looking in. Performance art of performance art.

This is not to say I think he is parodying the 60 year scope that there has been of rock artists and styles and, if anything, my opinion is he’s embracing these. What Krol is doing differently from those just recycling the sound (Greta Van Fleet), lampooning it (Green Jellÿ), or honoring it (The Gaslight Anthem) is that he’s dismantling the level of comfort for us rock regulars who feel that we know our heroes even though what we know is largely assumption. Krol is giving you a rock-star that feels like he’s regretting the role he’s taken on for the same reasons others spend their entire lifetimes craving it. This Krol doesn’t really have that much to say other than what he knows within arm’s reach; teenie-pop drama, the fact hurricanes happen. When this Krol attempts to shake up his lyrical formula, he mostly falls flat on his face. The dude’s not creative. He has no message and he seems to know that and he’s trying very hard to make sure you don’t know that he knows that and he is failing miserably. You do get the sense that at some point in this Krol’s life he very much did wish to be a rock-star, but this Krol has long since trashed that interest and seemingly forgotten any reason as to why he had this interest in the first place. It’s sad and a total inverse of your standard DIY scene kid who DOES have something to say and is somehow still getting nowhere with that.

I really felt this when I saw him live at Comet Ping-Pong less than a month ago. It was a great show, great songs and atmosphere leading to a night I don’t think I’ll forget, but there was something to Krol’s stage presence. The man was physically contradicting himself and looked lost as a result, not really having direction or knowing what he was doing even though he absolutely MASTERED the crowd. Krol would get off the stage and walk forward into the audience, a path instantly being made for him. That’s all he did for that. The whole room was lit up with a banger and that’s all he did. He’d go in and go back, singing. He did this multiple times in almost exactly the same fashion. It looked tired, like some antic that would once rile him up and lead to frenzies but it no longer did. He was there, the crowd was just there. Nothing was commenced, and that made it completely insane to me. Krol would stand on the drums or amps several times throughout and would just… stand. Sometimes it looked like he was searching for dust-bunnies in the fan above him but that’s the extent of how intensive these moments turned out to be. Oh, he did have trouble getting off of one of the amps, that was a doozy. In the end, though, Mike Krol did what no other rock-star I know of has done; turn something that was once totally Iggy Pop and extremely exciting into an empty routine. This is the performance art. This Mike Krol is a reflection on 60 years of rock ‘n’ roll and what that has come to.

Nonetheless, he’s celebrating the genre and he is having fun. If you go to his bandcamp again and look at the artist description, Mike Krol is a “band/idea”. He’s not a solo artist. He’s an idea. Concept. You couldn’t read that just from listening to “15 Minutes” and all else, but I think that’s the Easter egg he’s left out for us. Or I’m completely wrong, or insane, or both. That’s very likely, and still this all is why I love Mike Krol. Among other things, his music is great, his aesthetics are top-notch. Even if my theory is completely wrong and I just spent 1,210 words shitting all over a man trying his best, I fucking love him.

I’d like to conclude and say that it’s such a neat thing to pick out what might and might not be the man himself in his music. “Left Out (ATTN: SoCal Garage Rockers” is too relatable of a song for it to be total bunkum, but I could be wrong. I don’t think so, though.

I feel left out

Of every scene and city I belong to

I’m taking back the heart

I’ll make my own thing

Better off without you”

This sounds like a man who knows what he’s doing and how it’s more meaningful than what artists similar are doing. Even if he still feels like a misfit, that’s not stopping him. And he deserves all of my support just for that ethos alone.