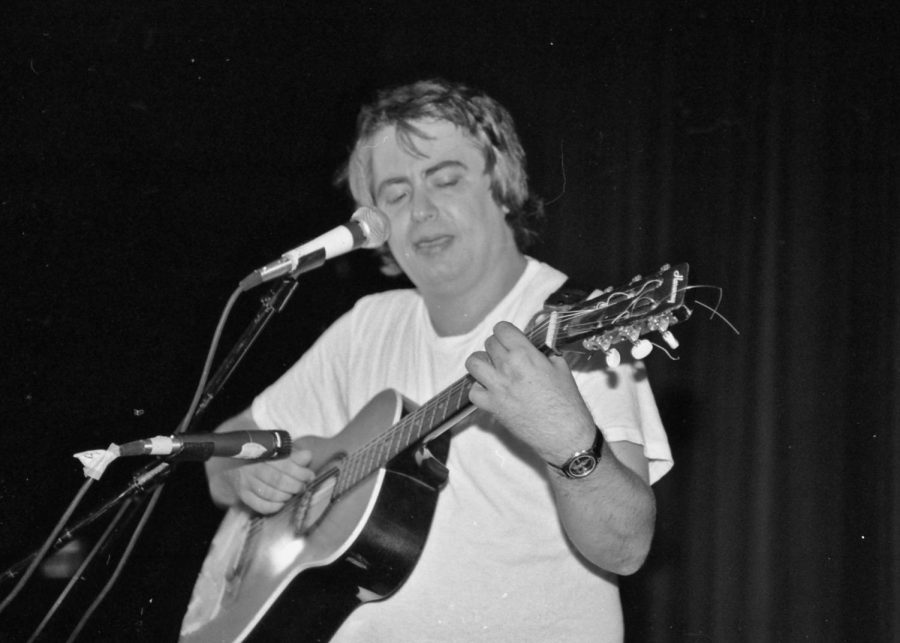 A few weeks ago, Daniel Johnston died at the age of 58. He began his musical career in the early ’80s, passing out his home-recorded tapes around Austin, Texas. Within a few years, he built up somewhat of a cult following and really began to grow as Kurt Cobain, a fan of Johnston’s, was seen wearing a tee shirt for his Hi How Are You album on national television. With the news of passing his fan base was extremely saddened. But something else happened as well. Johnston’s passing got a lot of coverage, not only within the music industry but in the greater news world as well, with articles being written in The New York Times, CBS News, among others. I am sorry to say that this is how I was introduced to Johnston and his work.

After I heard the news of his passing, and saw how ubiquitous the coverage was, I felt the need to listen to his music. The first song of his on Spotify is called “True Love Will Find You in The End”. After my first listen, and each one since, this song has left me in tears. A short bare-bones track with only a guitar and Johnston’s voice, this song is surprisingly impactful. What I find so moving about this track is its lyrics:

This is a promise with a catch
Only if you’re looking can it find you
Cause true love is searching too
But how can it recognize you
Unless you step out into the light, the light
Don’t be sad, I know you will
But don’t give up until
True love will find you in the end

With just two verses and less than a two-minute run time, this song has the ability to reduce me to a sobbing mess every time. This idea of staring into a void of loneliness with not only a sense of hope but also with a sense of striving towards being happy is extremely astounding to me. However, there is definitely something else at play. Given the context in which this song was presented to me, the artist having just died, I was sort of primed to have a certain interpretation of what I was about to listen to.

When I interact with media by a living actor, writer, musician, or any other type of artist, I am able to understand that their content is not necessarily indicative of their identity. This especially applies to creators who have some sort of persona or character that is intentionally separated from their actual selves. Father John Misty is a great example of this. As a musician, Father John Misty is brash, dramatic, and just completely over the top. But the person behind this character, Josh Tillman, seems nothing like that. When I watch a movie like The Martian, I’m able to enjoy it, but I’m also able to understand that Matt Damon is just a guy living his life. For Tillman, Damon, and all creators, their art doesn’t define them, and we are able to separate one from the other.

This separation becomes rather difficult when the person has recently passed. Hearing a song from someone who has died, a sense of finality washes over me. Someone who has died will never make another album, movie, or book ever again. With this added sense, it’s difficult not to meld creation and identity together. When these two concepts meet, it can be a beautifully haunting experience.

Something like this happened to me years ago but, until now, I was never able to put it into words. While in middle school, I was discovering all the huge classic rock groups one at a time. I would find Zeppelin and listen to their music constantly for months on end, and then I’d find Black Sabbath and do the same. The one major band that I couldn’t seem to get into was The Doors. I’m not sure what it was about them at the time, but I just wasn’t interested. Then, one day in 2013 I had heard that their keyboardist, Ray Manzarek, had died. This prompted me to give the group another listen. What followed was one of the strangest experiences I’ve had in my life.

I lay in bed and browsed through their discography on the internet. I found “Riders On The Storm” and hit play. The song starts with the sound of rain and eventually the drums and bass come in with a quiet groove. All of a sudden, like tiny drops of rain, a few keyboard notes here and there. Then about thirty seconds into the song the most delicate and beautiful passage, notes falling one on top of the other like a waterfall perpetually collapsing in on itself. I felt like I was skydiving without a parachute and yet I was totally calm. This moment that only lasts about seven seconds was one of the most intense musical experiences of my life. It had me hooked and I listened to the rest of the song, followed by much more of their music. Listening to Manzarek’s solos were, and still are, totally entrancing. That first listen of his solo in that song felt like meeting some great and knowledgeable spirit and being shown just a glimpse into some higher truth.

I don’t think this experience would have been as mystical had I not known that the artist had just died. It’s a strange experience but hearing Johnston’s song has helped me put it into words. They were very similar experiences. It’s hard to say just why this happened, it may be that death is definitely an emotionally difficult thing to deal with in many contexts or the content is just that moving. It’s most likely a combination of the two.