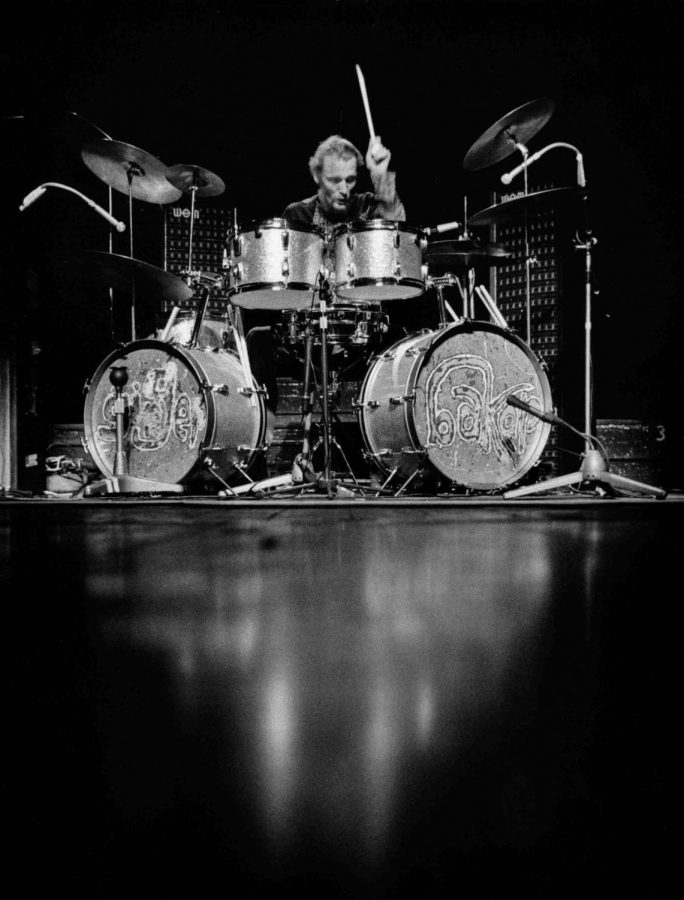 I don’t want my column to become a sort of obituary. My last piece was centered around the death of Daniel Johnston. Given the circumstances, this one will also be centered around the death of a musician I consider extremely influential, personally and otherwise. Earlier this month Ginger Baker died. He was a fearless drummer that gained his legendary status by playing in Cream with bassist Jack Bruce and guitarist Eric Clapton. While he had an immense career after Cream’s two-year run, this is how most people know who he was. It’s been well documented that Baker was not the easiest person to be around, to put it extremely lightly. However, this isn’t about who he was as a person. What made him so important to me and so many others around the world was his work behind the drum set.

When I think about great rock drummers and why they are great two major camps form in my head. In one group you have people like Led Zeppelin’s John Bonham, Levon Helm of The Band, Nirvana’s Dave Grohl, and ACDC drummer Phil Rudd. These guys perfect two main things, the first of which is play “in the pocket”. Their drumming is all about seamlessly slipping into the song around them. A drummer may be playing in time but without being “in the pocket” no one, not collaborators nor audience, will really feel it. The second aspect that this group illustrates is confidence. Whether you’re listening to Bonham’s spacey solo on “Moby Dick” or Rudd playing a simple backbeat on any given ACDC track there is no hesitation, doubt, or timidity to be found in their playing.

The second group includes people like Neil Peart of Rush, The Police’s Stewart Copeland, and The Who’s Keith Moon. These drummers focus lies more in innovation and originality. This isn’t to say that this second group can’t play with a good feel or that the first group is all cookie-cutter drummers. However, in my opinion, these categories are where their strengths and general appeals lie. The drummers of this second group are willing to do things that are out of the ordinary, either by working out each note of an intricate song like Peart or by coming at the set with every calorie of energy in their body and seeing what happens like Moon. These guys have come up with some of the weirdest stuff I’ve ever heard. While the first group’s drumming may inspire people to pick up a pair of sticks and join the community, the second group inspires drummers to be creative and pushes the art forward; both are vital to the continuation of musicianship.

What made Ginger Baker special is the fact that he could never be put into some category. What he played was totally unpredictable but at the same time, it felt right. Usually, with more unorthodox styles, people need time to marinate in what’s being presented to them. Baker’s playing, however, requires no period of contemplation to gain an understanding. From the moment the song starts, as a listener, you buy in and your hooked. Let’s look at Cream’s most popular song “Sunshine of Your Love” for a demonstration.

Doesn’t sound strange, right? Nice and straight forward, nothing to complex. While there may not be too much technically difficult drum work on this track there is a sort of subterranean shift, something odd going on at a fundamental level of his playing, that takes a lot of talent and confidence to pull off. When you clap along to a song you are mimicking the snare drum, and it is almost always during the upbeats, or two and four. Think of the country classic “Wagon Wheel” and how you would clap along to it.

This is known as a backbeat, where the strong beat is at the end of the phrase (one TWO three FOUR). Many songs in pop, rock, jazz, country, dance, etc. follow this basic pattern. In “Sunshine of Your Love” Baker is playing the opposite pattern (ONE two THREE four) let’s call it a front beat? In many cases, this can seem extremely awkward and even just plain wrong. On top of this basic switch, he builds a full drum part with hills and valleys and some tasty fills. Baker wins us over by not second-guessing his artistic choices and making those choices feel great to listen to. There aren’t a lot of drummers that can rock a front beat, but if anyone could, it was Baker. This is just one tiny example of the innovative spirit Baker brought to the drums. His drumming is a testament to the idea that there isn’t one strict path or formula to obtain genuine artistic expression.