Up and Coming in the District: Rosie Tucker 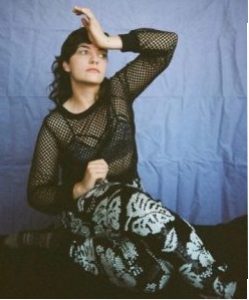 It’s week and a half after my first column, where I saw Halpine and Poppies, and I’ve found myself back at Songbyrd. This time, it’s to see Rosie Tucker and Taft.

It’s starting to get colder outside, which is great for so many reasons, one of which is because of how right Songbyrd feels during the fall. Since I discovered Songbyrd during fall of last year, the two are inexorably linked in my mind. The season just doesn’t feel right until Songbyrd is part of my regular rotation, like When Harry Met Sally or LCD Soundsystem’s Sound of Silver.

It’s also midterm season, which means we’re all like five minutes away from a mental breakdown. Really and truly, the only way to combat this is to get out of your dorm and find your way to some live music. I promise, your life will have some semblance of meaning again.

Meaning isn’t hard to find when you’re listening to Rosie Tucker, a Los Angeles Native who’s rock is not too far off from last column’s up and comer, Poppies.

Tucker was accompanied by Taft, a solo act from Texas. His most recent release, Goodnight, Plum is chock-full of soft and soulful melodies that are just as present in his live performance. His Texas roots were clear in his folk-y lyrics and the twang that he sometimes sang with, but his music can generally be characterized as chamber-pop (something that I didn’t know existed until today), it’s in the indie pop/rock family but there’s more importance in the melodies and production of a song, making for a more orchestral sound than your standard indie-pop track. If Perfume Genius and the slower Arcade Fire stuff is your jam, check out Taft.

That’s it for this week’s Up and Coming to the District! We’ve spent a solid two posts at Songbyrd, so I think it’s time to branch out. In the next few days I’ll be scouring the event lists of Black Cat, 9:30, and U-Street music hall. Place your bets now, and check back in on Halloween for an extra spooky column.