The Pinch is Dead, Long Live the Pinch 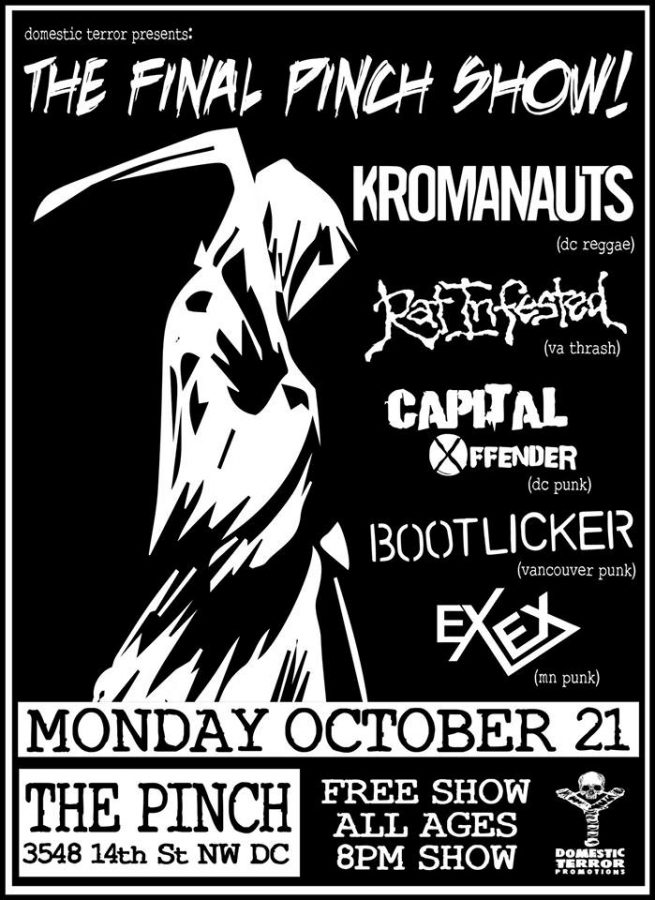 On October 21st 2019, the DC-based “Pinch” had its last ever show. At the time of my writing this on October the 22nd, I recognize that today will mark the final closing of this under-rated venue’s doors, the good times, memories, and friendships I’ve created moshing and performing there now acting as reminders of the Pinch-shaped hole that once was my heart. The place was a monolith of my and many others’ own, personal music histories.

Time has passed since, a week and a half or so. I have used that time since writing the above paragraph to think about where to continue from there. Do I write about the last show? Do I write a review or something? Like, about the Pinch as a whole? There’s a lot for me to say here since it’s going to be something of an epitaph, but I think the best path for me to take for this article is writing a simple retrospective of the venue. A look at the last show seems too small, and a review requires harsher words than I am willing to give, so here we go.

The Pinch was the first official venue to house my music. Prior to playing there, I had performed impromptu sets at the Commune (house venue) and UMD’s WMUC radio station. Turb, the band I played with, was with me for that latter show. A garage rock band with two cover songs in our six-song setlist, we were terrified by the fact our sound just didn’t align with that of the bands we were opening for in what was our first show ever, let alone at the Pinch. It had all been planned incredibly last minute after all; it was a hardcore/pop-punk show that needed one more act. We were that act. Things couldn’t’ve sounded more haphazard on paper.

And in real life, it turned out pretty bad. We were tinny and out-of-tune. At one point a particular song started out clean when it should’ve been distorted so instead of just playing out the whole thing I decided to hit a pedal and convert an obvious accident into an even more obvious train wreck. You could hear the exact moment my bandmates looked at me in confusion, realized what had happened, and started playing again in a vain last-ditch effort to save the remaining minute and half of an otherwise good song. We were embarrassed and we thought everybody noticed.

If anyone did notice they certainly didn’t let us know it. No one heckled us. In fact, they seemed to think our set was great, the room wet with smiles as we finished off the first quarter of the show they had paid 10 dollars for. That’s when I learned what was happening at this show and what would happen for any Pinch-related activity to come in general. Everyone that was there was just happy to be there, the music being any good only acting as a plus to the already-existing sense of comradery lacing the Pinch and the conversations had inside of it. People went there to meet other people who liked their music. Bands played there because the Pinch would have them, the Pinch had us there because they were a venue that was willing to give bands their first real public space to perform. The Pinch was the center of a community disguised as a venue on some random corner of Columbia Heights.

I went to so many shows there, made so many friends. I wrote an article for this station about my mates in Torvus after they played the Pinch. I solidified still strong friendships at the Pinch, took people on dates to the Pinch, and ate surprisingly good food at the Pinch. I saw crackheads chasing and beating one another to a pulp just yards away from its doors, I nearly moshed myself into a stupor multiple times between its walls, I helped move gear for bands that I had never heard of and would never hear from again. I did the Pinch.

So, during the Pinch’s last-ever show, it didn’t surprise me that I talked with people more than I listened to the music actually being played. There must’ve been a hundred people there; a crowd comprised of familiar faces whose names I didn’t know. I was humbled by news that my own music was growing popular, that people knew me. Random people went up to me just to ask when my next show was, one person recited my own lyrics back at me. One guy, the singer for the band Rat Infested that played that gig, said, “Hey Milo, want a sticker.” I had never told the guy my name even though I had seen him countless times at the Pinch. Ben, a friend I hadn’t seen in two years, was there. It seemed like no time had passed since our spending spree on McDonald’s during that manic episode I had so long ago. And why would it? We were family after all.

That’s what the Pinch was— a family. And I will remember that family for the remainder of my days. Thanks, Pinch.