Headphoning It In: In Square Circle, a Stevie Wonder Masterpiece & Cornerstone of R&B 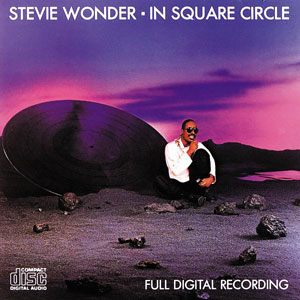 1985: Thirty-four years ago, a decade after a historic run of classic albums, Stevie Wonder released In Square Circle. Much like his previous masterpieces, the album weaves together a compelling, socially conscious tale in a mere fifty minutes. Only one of the ten tracks has an under four-minute run time, yet they all still manage to fully embody the passion and joy of Wonder’s reinvented sound. In Square Circle was Wonder’s first album in half a decade, and would become one of his best. It followed up the five albums, Music Of My Mind, Talking Book, Innervisions, Fulfillingness’ First Finale, and Songs In The Key Of Life, that makeup Wonder’s legendary classic period. Unfortunately, In Square Circle never received praise in the manner it should have, beyond its two successful singles, “Part-Time Lover” and “Overjoyed.” This Grammy-winning album does not have the same heavy, political undertones as his previous works, but is still able to exemplify the pure mastery behind Wonder’s musical craft.

In Square Circle has all of Wonder’s staples – dance tracks, political messages, harmonies, and heartfelt love ballads. One of Wonder’s most iconic songs, “Part-Time Lover,” embodies the punchy 80s sound that has made its own reemergence in the present day. “Whereabouts” takes on a softer, spacy tonality with existential themes of craving the past and feeling lost. “Spiritual Walkers” and “Land of La La” are more sonically playful but are lyrically compelling with imagery of society at large (we do, in fact, live in a society). Much like “It’s Wrong (Apartheid),” which addresses Wonder’s clear stance against apartheid, they convey more politicized messages without sacrificing their catchiness. “Overjoyed” is an atmospheric ballad, with delicate piano and guitar accompaniments as well as sounds of nature, like bird chirps and ocean waves.

“Never In Your Sun” is the crown jewel of this album. It is one of those songs that transcends its era, and should be well-solidified as a timeless masterpiece. The track is dreamy, synthy, and has a killer harmonica solo. The rhythmic percussions make it hard not to sway along, and the key shift – it’s beyond magnificent and brilliantly executed. For an artist with such an extensive catalogue of catchy hits, “Never In Your Sun” is one of, if not, the most melodically pleasing.

The question remains: why is In Square Circle a cornerstone of R&B today? The 1980s saw the transformation and reinvention of styles, new and old. In fashion, culture, and music, there was a shift towards a dreamlike quality of life that was still layered with sociopolitical complexities. The reemergence of ‘80s style only further solidifies how influential this sound is. With the year winding down, it’s evident how this decade’s sound was so influenced by that sonically distinctive period of time, pioneered by Stevie Wonder and his sonic reinvention with In Square Circle.