Bringing the magic of unplugged back: Courtney Barnett 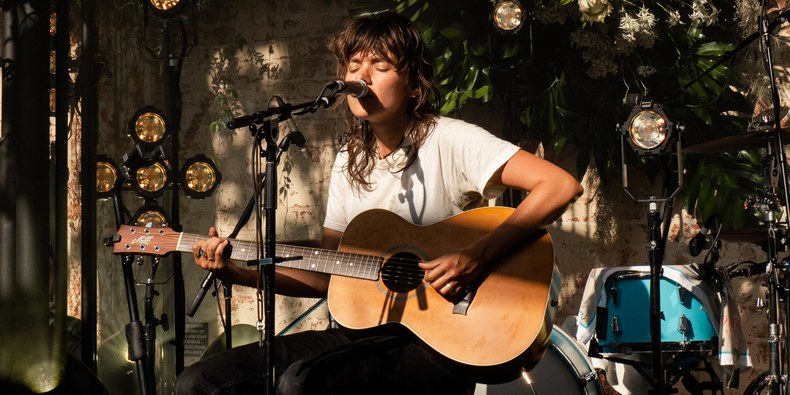 The first things that come to mind when someone mentions Courtney Barnett are her fast electric guitar, the monotonous voice, and her conversational lyrics. I was hesitant at first when I heard she was releasing an MTV unplugged album, because while the toned down concert method has defined the careers artists like Nirvana, it has also been disastrous for bands like Korn and Lauryn Hill. I was afraid that the acoustic, slow nature of the show would extract the fun out of Barnett’s rock music leaving a deadpan bland performance.

Instead, Courtney proved me wrong from the first note she played. Depreston starts slow and creates a harmonic environment that brings a sense of magic calmness. Her ability in the guitar, as well as the impecable backing sounds keep the soul of her songs, while allowing for a daunting reimagining of them. In her classic Sunday Roast she picks up the pace, and the violin makes it feel like a jarring journey. She keeps the magic alive in her duet with Paul Kelly highlighting her musical ability as more than just a deadpan voice. Barnett hits notes outside her usual range and creates a human approachability in her songs that makes it feel as if she’s playing just for you. When she gets to Avant Gardener the pace picks up the beat, but keeping the warmness of the album, and bringing in an emotional wave. Nameless Faceless is the lowest point of the performance. While the instrumentals are still amazing, the coordination is kind of odd.

Nevertheless, the performance picked right back up with an untitled song that slows down the pace, has perfectly executed complex guitar licks, and felt deeply personal. The cover of Not Only I was played in duet with Marlon Williams in perfect synchronicity and it sounds spiritually enlightening. When the chorus hits it feels like the sky opens and some form of magic takes over the stage, the audience, and the musicians. Courtney engages a little bit with the audience, yet it isn’t necessary, everyone is on the same page thanks to her music.

The most beautiful, magic, and emotional moment comes with the closing cover of Leonard’s Cohen So Long Marianne, the lyrics are Cohen at his best, yet Barnett elevates the song, brings in the sadness, the melancholy, and the tears in the best way possible. It is not only a monument to Leonard Cohen, but a statement for the level of artists that is Barnett. She maintains the spirituality of Cohen’s lyrics, while bringing her own emotion into it, and transmitting it to the audience. She is at a point where she can take almost any song and make it her own with her ability to sing it like a conversation, and making it dauntingly beautiful.

The performance brings the intimacy and magic that made the 90s performances of MTV unplugged jarring. It showcases Barnett as more than a rock musician, but as one of the most innovative leading artists of this generation, and it might finally bring her the recognition she’s long deserved.