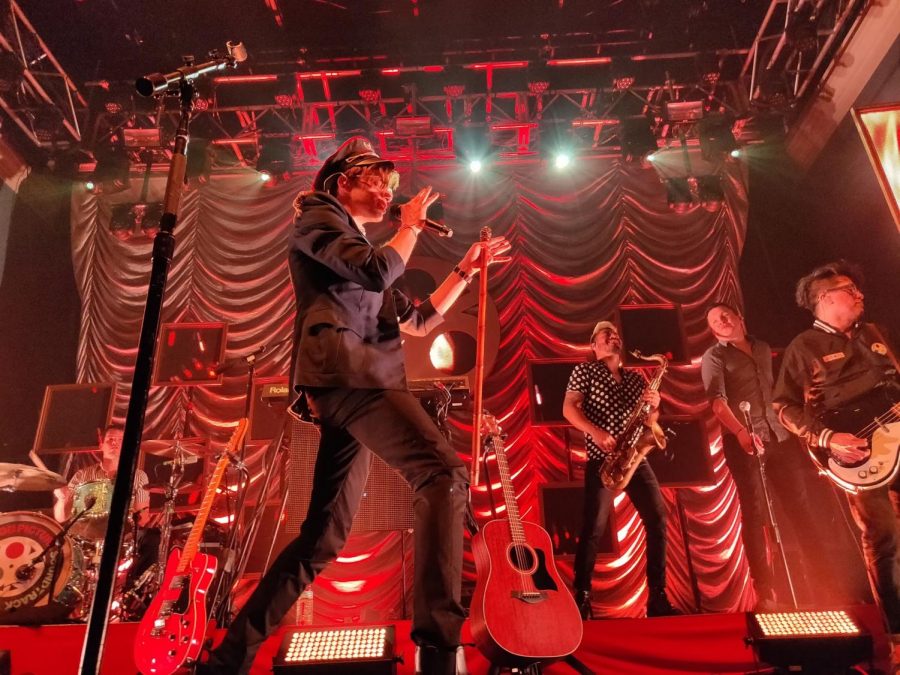 Saint Motel occupies a strange space in music: you may not know their name, but I guarantee you’ve heard their songs. Hits like ​”Move” ​and ​”My Type” were fairly high charting songs that are constantly featured in commercials, online video, and get radio play to this day. Their newer releases follow many similar songwriting tricks they often employ, and their newest single, “​Van Horn,​” is yet another earworm they have added to their discography. Their infectiously catchy hooks and saxophone intros make them a joy to listen to, and as I discovered, makes for a ridiculously fun live show.

Their latest tour, The Motion Picture Show, is one of the most inventive smaller venue shows I have ever attended. It is structured as a movie with three scenes, and a bonus encore. While it’s no musical with a concrete storyline, each ‘scene’ had its own costume changes, category of music, and stage props that clearly differentiated every section of the show. A narrator takes the audience through the show, setting every scene up and giving us an idea of where we as the audience are supposed to be, taking us from Everest to the Military March, and then Space, before finally bringing them out for the encore Band Biopic.

The set was beyond fun, with the saxophone hooks translating into fantastically danceable music. The band was clearly having a blast on stage, and the attitude rubbed off on the crowd. For almost every song, lead singer AJ Jackson could have easily put aside his microphone, because everyone in the audience knew every word of every song. During ​”Cold Cold Man​,” he never sang a chorus, instead letting everyone else belt out the words. When the brass solo during ​”Destroyer” k​icked in, their saxophone player absolutely shredded his instrument, and I witnessed my first ever mosh pit to a funky saxophone solo. They had two covers featured on their set: the first being their rendition of Maxine Nightingale’s joyous “Right Back Where We Started,”​ which fit perfectly with the rest of the Saint Motel discography being put on display. The second one was not quite as much of a crowd favorite, that being ​”Chicago​” by Sufjan Stevens, but they did a fantastic job nonetheless. Other highlights of the set included crowd surfing before “My Type,” J​ackson’s incredible sustain during the end of ​”Born Again​,” and the small band biopic put on just before ​”Butch.”​

The show as a whole was, if not already evident, so much fun. There’s really no word I could use to describe better the environment, people, and even opening band KOLARS. Saint Motel is a really special band with a special sound, and seeing them live was an unforgettable experience that also happened to be an absolute blast. While not one of the most technically advanced live shows of the year, or the absolute best I’ve ever been to, The Motion Picture Show was an evening wonderfully spent. With only a few shows left on their tour, I cannot recommend enough to go see them if you still have the chance.