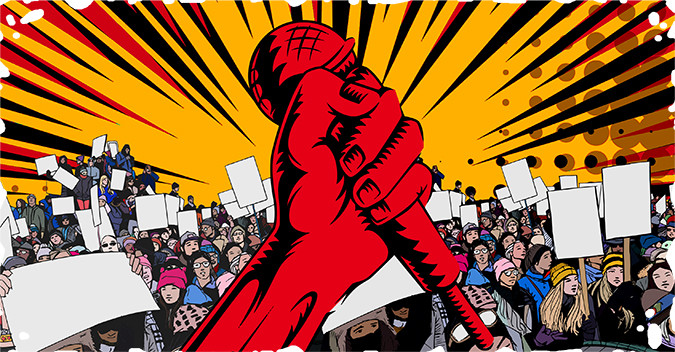 With the Democratic Party presidential primaries and caucuses in full swing, I thought it only appropriate to share some of my favorite politically charged tunes to (hopefully) motivate y’all to hit the polls or send in your absentee ballots, if you haven’t already. This playlist consists of mainly rock and hip-hop but all songs contain a political message. They range from classic protest songs such as Bob Dylan’s “The Times They Are A-Changin’” and U2’s “Sunday Bloody Sunday” to more new age protest anthems like Fashawn’s “Mother Amerikkka” and YG and Nipsey Hussle’s “FDT”.

Below is a brief synopsis of all 20 songs on the playlist:
Evening Prayer aka Justice – Ezra Furman
Furman describes this song as a rally cry for all music fans to become activists and channel their “punk energy” into the fight against injustice.
Sunday Bloody Sunday – U2
U2 is well-known for their political activism and Sunday Bloody Sunday is arguably one of their most famous protest songs. Although it was written about one of the deadliest days of  “The Troubles” in Northern Ireland, the song translates to any movement that conveys a message of peace.
Bad Reputation – Joan Jett & The Blackhearts
Jett wrote this song about unapologetically making room for herself as a female artist in the 70s. Its lyrics still, unfortunately, translate today as women still fight for respect in every industry.
Ohio – Crosby, Stills, Nash & Young
Perhaps the group’s greatest protest songs was born out of the Kent State Massacre in 1970. The song honors the right of lawful protest and calls students “to be vigilant and ready to stand and be counted,” according to the group.
Give Me Love (Give Me Peace On Earth) – George Harrison
This song has a different energy to it than most of the other songs on the playlist. It is more hopeful, with Harrison almost begging for help to cope with a heavy load. With the toll that the current political climate has taken on seemingly everyone in the world, there’s bound to be a few people who can relate to the feeling that Harrison conveys.
We The People… – A Tribe Called Quest
This song is a power packed anthem about intolerance and fear. It was released in 2016 following President Trump promising his supporters that the wall would be built.
For What It’s Worth – Buffalo Springfield
Perhaps one of the most famous songs to come out of the 60s was For What It’s Worth from Buffalo Springfield. Written about curfews put in place for kids in Hollywood, the song is an anthem for the opposition of authority.
The Times They Are A-Changin’ – Bob Dylan
This is one of the most prolific protest songs of all time. Dylan famously gives voice to the voiceless and calls on those with platforms to use them for good.
Revolution – The Beatles
This song calls for revolution without destruction and evolution with a plan.
New Year’s Day – U2
Although the song was written about the Solidarity movement in Poland during the 1980s, its meaning transcends borders and time. Its main message challenges oppressive rule, which many can identify with today.
Mother Amerikkka – Fashawn
Just listen to the song and its lyrics will speak for themselves.
Letter To Donald Trump – Yung Blu
The song opens with a recording of Donald Trump spewing racist rhetoric about Mexican immigrants during a rally and transitions into Yung Blu rapping about his Latinx culture and the reality of being of Latinx descent versus the image of immigrants that Trump is trying to portray.
FDT – YG and Nipsey Hussle
The song starts with YG talking about how he once believed that Donald Trump was an influential business man pre-presidential campaign and then he promptly gets into the meaning behind the title: Fuck Donald Trump.
Fortunate Son – Creedence Clearwater Revival
Written about the Vietnam War, its spirit of protest against nepotism in the United States is unmistakable.
Refugee – Tom Petty
A classic anthem of defiance and the will to fight for freedom.
Alright – Kendrick Lamar
This song has become a fixture in protests pertaining to the Black Lives Matter movement for its brutally honest lyrics about the Black experience in America.
Fight The Power – Public Enemy
When Spike Lee asked for an anthem for his movie, Do the Right Thing, (which is about racial tensions in a big city) Public Enemy delivered. Even though the song was released over 30 years ago, its power has not diminished.
This Is America – Childish Gambino
Childish Gambino seizes the opportunity to use his platform to speak out about racial injustice in America and forces the listener to confront the uncomfortable realities of life in America for a large part of our population.
Hallelujah Money – Gorillaz and Benjamin Clementine
This song was bound to make a statement. It was Gorillaz first release in 6 years and was released the day before Donald Trump’s inauguration. The soulful nature of the song reaffirms its statements of hope in the face of adversity.
Love It If We Made It – The 1975
When Matt Healy writes down every politically charged event that made him mad over the course of 3 years, the result is an all-encompassing protest song for this generation.