Why I Cover: “You’re Gonna Miss Me” by The 13th Floor Elevators 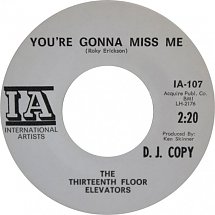 Let me preface all the following adulation I have for this song with something I should just get out of the way in advance: I’ve never done acid, nor do I plan to. Today I will be venturing to veer myself ever so slightly in your general, psychedelic direction because in this edition of “Why I Cover”, I’m taking on the harbingers for the single culture-appropriating shroom-dealer everyone seems to have, Roky Erikson and his hippie-dippie, proto-punk crew.

Not to get hung up on over-prefacing an article already a paragraph thick but the title of this entry is technically misleading as I don’t cover this song anymore and, frankly, I’m more than okay with that being the case. It’s not that “You’re Gonna Miss Me” is a bad song— far from it— it’s just that its sound reeks of a very specific time of my life. And to that end, that’s what the song is and will continue to be for me; a symbol of my musical past that I just don’t have the spoons to play anymore. Let me explain.

“You’re Gonna Miss Me” is one of the first songs I played with one of my first bands, Turb. I was very much a teenager then, and this ditty is very much a teenager’s ditty albeit if you’re a weird teenager with few friends. It’s by no means a bubblegum teenie-pop piece a la “Sugar, Sugar” by the Archies, but you can tell that the band’s inspiration for much of their work was exactly that kind of music, just warped with acid use and darkened by the hell-scape of a backdrop that was late ’60s America. Think the Ramones if you subtracted a few years and replaced a member with someone who makes Dee Dee Ramone look like a D.A.R.E. officer. Oh, and they’re also, like, really good at guitar.

What makes this song so dated in terms of my personal history is its being soaked so completely to the bone with a nasally guitar tone and a proper paranoid edge that any loner stoner from high school would seem to like. And, that’s not me right now. But old me from back then didn’t even do drugs and “You’re Gonna Miss Me” still managed to speak to me. Perhaps I didn’t require a drug habit when the entire experience was tantamount to a pretty nasty trip in and of itself. The trauma from those four years embraced the song that seemed to shake within its own boots and not flow with the kind of finesse I had grown to expect from late ’60s music. The song was frenetic to the nth degree. Erikson’s yowling throughout gave voice to a void I perfectly recognized in its taking on the shape of falling on a rainy day. Visions flashed, shadows streaked back and forth, and senses became questionable. I never exactly knew what it was that gave the song that effect, let alone why it was so listenable, but it somehow made right all the wrongs that I was feeling. The song got me high and the song was drugs.

So, of course, I gave it to my ragtag three-man band to decipher. And we failed. The song was more than its simple chord progression or my awful screaming and its essence was not meant to be merely duplicated in some roundabout effort to sound unique. We recorded it as a garbage demo because we recorded everything we did in those days, but the band does not practice it. Hell, I hardly play it by myself anymore. I just refuse to touch it.

Perhaps it’s because “You’re Gonna Miss Me” is intensely a piece of its moment. When I listen to it now, I see a band covered head to foot in flowers and flowy gowns trying to play peacefully as the end of the world befalls the already torn landscape around them, the image growing smaller with distance as if the shot was zooming away and into the darkness of the credits. The song is the last paragraph of the last page of the last book that will ever matter, unread now for years, and gathering dust upon its shelf buried under the sea. I didn’t grow the leagues that separated me from the song— they came with it. And while that’s exactly why I ever bothered to play it in the first place, that reason also doubles as support for leaving it be. Nonetheless, I invite you to listen to it or play it yourself.