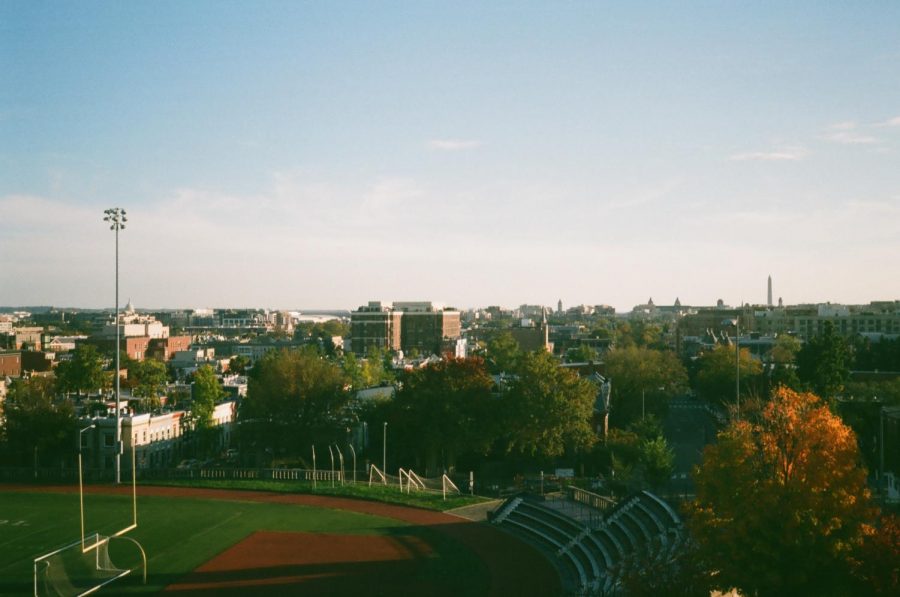 I am writing this from one of my favorite places in DC, a parking lot in Columbia Heights that overlooks the many monuments, now resembling lego pieces of an unfinished set. My friend Katie took me here a few months ago after returning from her home in Russia, and now I come here every time I need to clear my head. I guess it’s that time of the year again now that the leaves turn reddish-brown and the weather kinda chilly, as I find myself trying to find a song that describes all my ups and downs and the situation many of us are now in, a song about the unprecedented year of 2020.

A track that first came to mind was Aurora’s cover of Half the World Awayby Oasis. Many may say that it is pretty straightforward, but I think there is plenty of room for interpretation. For me, it’s about that feeling of being stuck in a rut, an unending cycle where every day feels the same. With the holidays now nearing, the song is a constant reminder of having to live literally half the world away from everything and everyone that makes my home, home.

In a sense, Half the World Awayperfectly sums up all my feeling of detachment into a melody so hauntingly beautiful, it gets me every time I need a good cry. But as angelic as it may be, it paints the year in a pessimistic shade that excludes all my achievements and the bonds I was fortunate enough to make despite the bad timing. 2020 has been pretty sad, but I have seen and been through worse. Now that it’s almost over, I think it’s safe to say that I have low-key enjoyed the extra amount of time I have for myself.

Another song that I could think of isIf You Know That I’m Lonelyby the band FUR. To be frank, this was my personal anthem of 2018 and a symbol of my angsty teenage years, a phase I haven’t really grown out of.

If You Know That I’m Lonely, with its upbeat sound of bass and guitar, is about one isolating oneself for fear of messing everything up. “Mistake after mistake, it’s safer if I distance myself / If there’s a way for me to not do what I have done for so long,” as they set the tone and the story of the song, these opening lines are also something I feel myself relate to on a daily basis. I’m what people often call the social introvert and having to spend hours on Zoom daily has definitely taken a toll on my mental health. Indeed, disconnecting from the rest of the world can be seen as its main theme. Still, I think the song also touches on another aspect of wanting solitude, the craving for companionship and understanding. I often hard relate to the lines, “Please let me know if you want me around / And I’ll try my hardest to be good” as I construe them to be about one’s need for constant affirmation, which may not even be close to what the band meant. My take is that the track centers around mental illnesses like depression and anxiety while highlighting the genuine desire to pursue intentional isolation. Still, I think it better reflects my growth as a human being, slowly adapting to society than the year 2020. If anything, it feels awfully like taking a walk down memory lane and reliving all the good and bad memories that have absolutely nothing to do with this year we are in now.

Taking a different approach, if I’m picking my 2020 soundtrack based solely on how many times I have jammed to it, it would definitely have to be Tú by maye. “Tú,” meaning you in Spanish, was my main drive to take a Spanish course this semester (which I absolutely love). Elegant, soft, and nostalgic with a hint of bolero, Tú is that song they would play over the scene where a character sees the love of their life for the first time, and everything else starts to move in slow motion. But even if you aren’t a fan of rom-com, Tú still gives out this peaceful vibe that takes you back to when life was simpler (pre-COVID, per se). Not only visually aesthetic but is a treat for the eyes, this song is the sound of pure love, the kind of love that warms them frozen hearts.

The year 2020 has been many things, but it has also been somewhat of a blur. Please don’t get me wrong, it has been hard on all of us, yet somehow it has also been so uneventful and unremarkable, it’s mundane. Mundane, meaning to lack interest or excitement, is the best word I can think of that encapsulates everything. All the hours on Zoom, the time spent by myself with nothing to do, all the boredom and loneliness I put up with while waiting for everything to be “normal” again.

So, drumroll please, the song I have chosen after hours standing here in the cold, brainstorming for a sound with lyrics mirroring reality, yet uplifting enough to not discourage, but to motivate, is Mundane by Hardcastle. Right of the bat, the track features funky instrumentals and a call for help, “Somebody save me from the mundane / I’ve been watching TV to entertain.” Released in 2019, the song now reflects a collective mentality of feeling trapped and dwelling on our own thoughts, yearning to go back to the past or for the future to come. We all crave human interaction; it’s one of our most basic needs. Yet, despite the heavy topic and kinda blue vibes, the song sounds anything but. I haven’t learned much this year, but I was lucky enough to get to know so many talented people that help me get through this tough time and show me how it feels to be out of my head. Mundane has the sound, vibes, and positive energy I hope to take into 2021, as well as the bonds I have made and cherished throughout this year of 2020.

Well, it’s getting all dark and cold now. Thank you so much for sticking around, and I hope everything is going well for you! Oh, and good luck with your finals too!!