One Year MONKed Out: An Interview With Hostile Mind 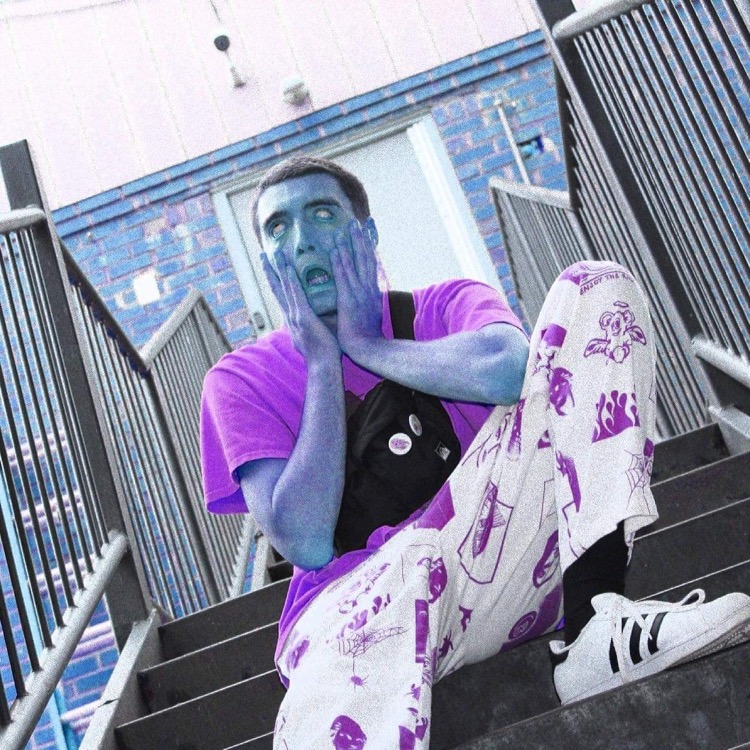 Around this time last year, WVAU posted my first article about Hostile Mind. It wasn’t a particularly long and in-depth piece, but its heart was in the right place— namely, scattered all over the room along with the rest of what remained of my imploded body. What was the coroner’s prognosis? “A swift demise by way of total and immediate annihilation as soon as the victim made audial contact with the thick, ugly riffage bouldering through HM’s 2020 release, MONK.”

That’s right, there’s a ghost writing this article! Don’t ask me how the coroner survived his apparent listen when I couldn’t…

Anyway, a year passed. Great music got released despite COVID, and from some of my favorite bands! But MONK stayed with me, all the way through a nightmare of a lifetime packed into 365 days, and I now find myself calling it one my favorite releases of 2020. This record, made by one dude with an iconoclastic chip on his shoulder, beat IDLES, Jeff Rosenstock, the Mountain Goats, Guided By Voices, and many more artists who managed to release some of their best material to date in the most squalid year imaginable. I applaud him from the afterlife. But with 2021 starting, I just had to know— what’s next? So, I got in contact with him:

Milo Paul (MP): Hey Aghiles! How are you? How is COVID keeping you?

Aghiles Ahmim of Hostile Mind (HM): COVID [isn’t] completely ruin[ing] things for me, but [it’s] definitely pretty hard on me, mentally. I was able to complete MONK, but not being able to perform any of the songs really limited my ability to promote it and the momentum I had built up for it was disrupted, so I had to adapt. Overall though, I can’t complain. I luckily haven’t been hurt financially by the pandemic, so overall, I can’t really complain, especially considering how bad it’s been for some people.

MP: Your album MONK came out about a year ago and ripped my head open. How did you do it, what inspired that sound and its aesthetics, and what do you think of the album looking back? Is there anything you wish you could’ve done differently? What of it are you most proud of? And lastly, what did you learn from the experience?

HM:  I’m gonna divide my answer into multiple parts so I can address each part of that question.

At the time that I was working on MONK, I had been expanding my music taste beyond punk and was getting into so many new genres. When I first decided I was going to make the album, I knew I didn’t want to make a typical punk record. So I started experimenting and mixing my regular hardcore sound with other genres, such as stoner metal, grindcore, delta blues, shoegaze, psychedelic rock, vaporwave, all kinds of genres. I don’t like sounding the same on each release. I like switching things up, always keeping my supporters on their toes.

Aesthetically, I wanted to play around with color contrast as a means of communicating the disillusioned, depressive tone in the lyrics.

As far as what I would’ve done differently, I think I should have given a bit more time for mixing and mastering, just so I could get those levels exactly right and make my tone a little less muddy. Overall though, I’m extremely proud of the album, particularly with my songwriting and the album’s flow. Even though it’s not perfect, I did my best and ended up creating a heavy, dark, powerful record.

I learned not to overthink, not to force something that shouldn’t be forced, and to not cram too much into one record. I like to trim the fat.

MP: From my understanding, your instrument of choice seems to be bass, and yet Hostile Mind is a solo project. How does that affect your music making process? Would you say it’s limiting, or is it not an issue?

HM: It forced me to be more creative. It brought me out of my comfort zone and made me experiment with different tones and tunings. It made me do things I could never do with a guitar.

HM: The best show I’ve ever played was on January 11th, 2020 at the Silver Barn. The lineup was Hostile Mind, Hotdog Water, Courage Mother, Two Thumbs Down, and Faceplant. The cops shut it down during TTD’s set. It was such a legendary show. I covered Rage Against The Machine that night.

As far as what inspires my shows, my only objective is to make the audience come out of their bodies and turn them feral, and I do whatever it takes to achieve that. I like interacting with the crowd, jumping in the pit, thrashing around. If you know, you know. Come to a Hostile Mind show and find out.

HM: Riffs. Lyrics can be a powerful tool, but sometimes a tasty riff can express certain feelings that words just can’t.

MP: You collaborate a lot with other DMV talents. Can you name a few and describe your experiences working with these individuals? Have any of these collaborations turned sour? (You don’t have to name names for the latter question)

HM: I wanna give a massive shoutout to the following artists: Hotdog Water, Two Thumbs Down, Courage Mother, Basement, Gonzo, The Degenerates, Sam Borek, Flowr, Friend of the Three, Laughing at the Void, and Ezzy. They are all extremely talented artists in their own ways, and I’ve had so many legendary experiences working with all them. Not to mention all the work I’ve done with my other band, The Dead Sons.

There are many others I’ve collaborated with but either I can’t remember their names or I had a falling out with them. As for the latter, I don’t want to speak on it publicly because I don’t want to attach someone else’s name to my brand. In the words of Big Body Bes, “Nobody’s gonna ride my wave.”

HM: I want to take Hostile Mind as far as possible. I want to bring hardcore to the masses and completely disrupt the music industry. I want my name to have weight and my goal is to revive the true spirit of punk rock by pushing it beyond its limits both sonically and spiritually.

MP: On that note, word is out that you’re working on a new project. What is it? What’s inspired it? Where does it stand creatively in context with MONK?

HM: I can’t disclose too many details about it, but this project is essentially MONK’s evil twin. It’s just as dark, but in a less depressing way than MONK. If MONK was depression, then this one is mania. It’s more raw, both sonically and lyrically. Sometimes it can get kind of depraved. This one is far less political, too. It’s much more concerned with being cocky/egotistical and saying “f*ck you” than it is about coming together to overcome. MONK is more conscious, this one is more hedonistic.

MP: I think we are about done here. What’s the first venue you want to play once the COVID era is over?

HM: I’d love to get another chance to perform another house show at Rhizome. Last time I performed there, the vibe was immaculate and the lineup was legendary.

Well, you’ve read it here first, folks. Remember to check out Hostile Mind on twitter (@hostilemindpunk), Instagram (hostilemindmonk), and of course on bandcamp.