Interview with Elizabeth and The Catapult 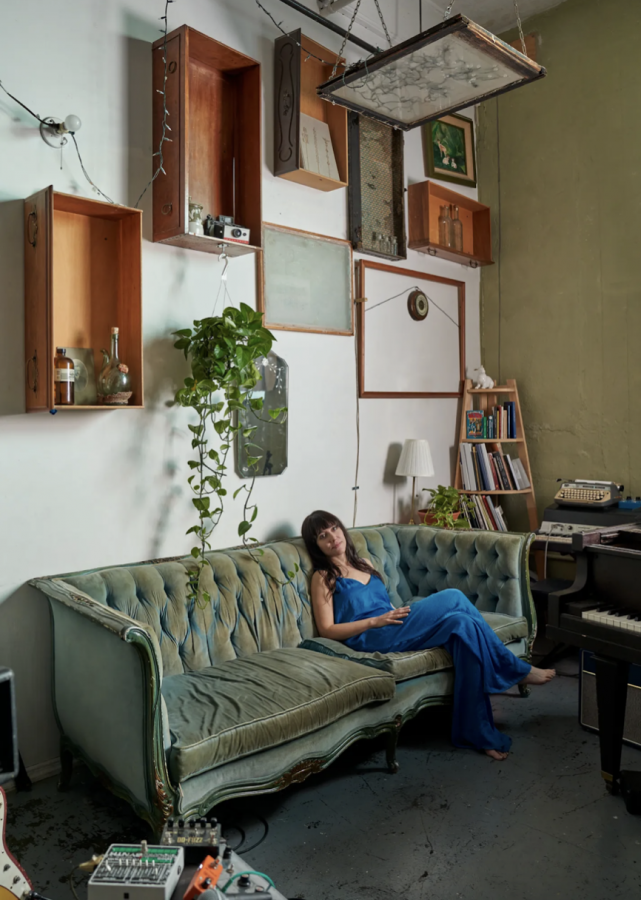 Photo by Seth Caplan courtesy of Elizabeth and The Catapult

I sat down (over zoom) with Elizabeth Ziman of Elizabeth and The Catapult and, briefly, her bunny to talk about her new album sincerely, e, her inspirations, and her air fryer. This interview is best enjoyed while listening to the album with your window open.

Talia Marshall (T): What song is stuck in your head right now?

Elizabeth (E): Most recently… there’s this really beautiful Portuguese singer Cesária Évora, who, I feel like is the Ella Fitzgerald of her part of the globe. She’s just, very, very famous, classic, and has a really low, earthy voice. And she has this song. “Soldad, soldad.” And so I would say that has been in my head because my album I just wrote is really an album about the different forms of loneliness. And that means solitude. So I think it’s just been kind of running through me for a couple of months…there’s so much heart, and that rub of hope and pain all the time.

T: I’ve been listening to your album a lot–big fan! If you could sum it up in one sentence, what would that be? Or a paragraph?

E: I would say that this album is the most it’s a time capsule of this last year. And it’s the most intimate and personal, raw piece of work that I’ve made because I recorded it at home and it’s my first self-produced effort. It’s an album about the breakdown of communication over this past year, during the pandemic, and the different ways that people cope with being alone, whether you’re feeling alone because you’re actually isolated in your house, like I was, or if you’re feeling alone within a relationship, or if you’re feeling alone in the crowd of people online because you’re just being like, inundated with things from ads and zoom and just the chaos of being in the online world. It’s just… trying to find hope in a really hard time.

T: How would you describe your sound to someone who has yet to discover your music?

E:  It’s interesting, I’ve been paying more attention to genre because of the Spotify playlists that I’m getting on and I always think of myself as more of a singer who sounds like an indie singer-songwriter along the lines of like Rufus Wainwright. Fiona Apple, Regina Spektor, I named people when people say that because I feel like it’s easier for them to take it in. But I’m a really huge fan of classic songwriting, like The Carpenters, things that really feel timeless like Leonard Cohen. And lyrically, Joni Mitchell. But I think that now that I’m doing Spotify playlists I guess I’m a bit folk and I’m a bit indie and I’m a bit pop and I’m a bit songwriter, and I’m a bit… I don’t know what I am anymore, but I think that I’m like somewhere along those lines because I think my genre can be kind of fluid. If you really listen to a lot of my stuff, it doesn’t really stick with one genre all the time.

T: That definitely makes sense. The best music is really music you can’t categorize. Another question I have is, what’s the first musical thing you’ll do once it’s safe to gather in big groups?

E: I think that I really do just want to play a song in a room with a bunch of musicians. Like just so many musicians just inside. I have this beautiful rooftop–I’m so lucky, it looks over just all of New York. It’s incredible. I’m in Brooklyn, and last summer I had some of my close friends like, not a lot of people, but some of them came up with me to jam on my roof in our masks and it was really fun. And I just want that experience but on crack, inside.

T: If you can remember, what’s the first song you ever wrote or remember writing?

E: When I was 15 I wrote a song called that went like this, no, no, no, no, you cannot tell me, nah nah, who to be… Just so cute, so angsty. So teenage, I like it because it’s kind of poppy. Like, it sounds like a salsa song or something. But it’s like all about “you can’t tell me who I’m gonna be.” But it’s very funny to me. And it’s one of my dad’s favorite songs… And he’ll always be like, “you should bring that nah nah song back.”

T: Can you talk more about your creative process? I know for the album you’ve talked about how you wrote it all in like one weekend or something.

E: I recorded half of it in one weekend, but a lot of that music, I had started musically before. And then I just changed the music or, and then added the lyrics, or, like, took an old song and spun it in a new way. I didn’t just write everything from complete scratch, that would have been really interesting. But I did have this jolt of inspiration, where I was like, oh, oh, and then like half the album was done. My creative process is very–I’m noticing is very much like that, where I have these jolts, where I feel like the muse is visiting me and sitting on my shoulder, and I’m just visited by songs, they kind of like run through me. And then I can just get like, totally in the zone. I think those are the best songs to me. I know a lot of writers that are like, “I wake up every morning, and I work for an hour on writing every morning,” and maybe I’ll become one of those people in my life. I don’t know. But for me, it’s like, I’ll have like months where the field lies fallow, I’ll have no inspiration. And then, I’ll just have an outpouring. That’s just kind of the way it works. I try not to force anything. But I will say that the process on this album was interesting, and different than the way I usually work. The way I recorded and thought about the produced songs was I would set up a mic with vocal–and I really am not an engineer. And it kind of goes to show that anyone can make an album just by setting up a mic in front of an AMP or in front of an acoustic instrument. So I would just set up like my mic and a piano and sing or just like a guitar and sing the basic song. And then I would sing background parts, as many as I can think of for the song and then I would replace each background part with another instrument. And I think what I realized from Fiona Apple’s Fetch The Bolt Cutters, which is very much sounds like her house, that if the arrangement is there, if the arrangement is there that’s all that matters. You do not need perfect sounding anything.

T: Can you talk about some of your inspirations for your music?

E: The musicians that inspired this album were Laura Mvula, who’s… like a phoenix or something. She’s not human… so she’s a big inspiration. But for the sound of it, I would say Fiona Apple and Joanna Sternberg–her new album was so great. And, this didn’t inspire songs necessarily, but just the spontaneity and wit of that show I May Destroy You. I’m just blown away by the storytelling–it feels like you’re hearing the narrative of the entire world in a way that’s light and playful, and that’s the kind of writing that I strive for in my life.

E: Well, just because I collaborated with one of my favorite artists ever, Wendy Mark, for this album, I would say I would love to collaborate with another artist, like Frida Kahlo or something, where I’m making music and she’s like, painting to the music, and to just see what my music would look like in colors and brush strokes? That would be insane. And Nina Simone is one of my favorite musicians, so it would be really cool just to be in a room with her. I’d probably be really intimidated.

T: What have some of your quarantine hobbies, other than creating a whole album?

E: I really got into aromatherapy for a second and then I was like, “Oh my god, I think someone’s trying to get me into a pyramid scheme” so I stopped. I got into all of my cooking appliances in a way that I never had. Like I just made like a hazelnut chia chocolate smoothie for breakfast. But I have so many fun things that I’ve been cooking in my air fryer–like I make like chicken wings all the time and all these pastries. So I’ve been cooking and I’ve been meditating more, like getting into like Ram Dass and… it sounds like I’m a self-help book right now. But I just feel like all the things that I got really into were like, oh, maybe this would be healthy. You know? Except for the food… except for the food.

Be sure to check out sincerely, e on spotify and tune into one of Elizabeth’s instagram live concerts.