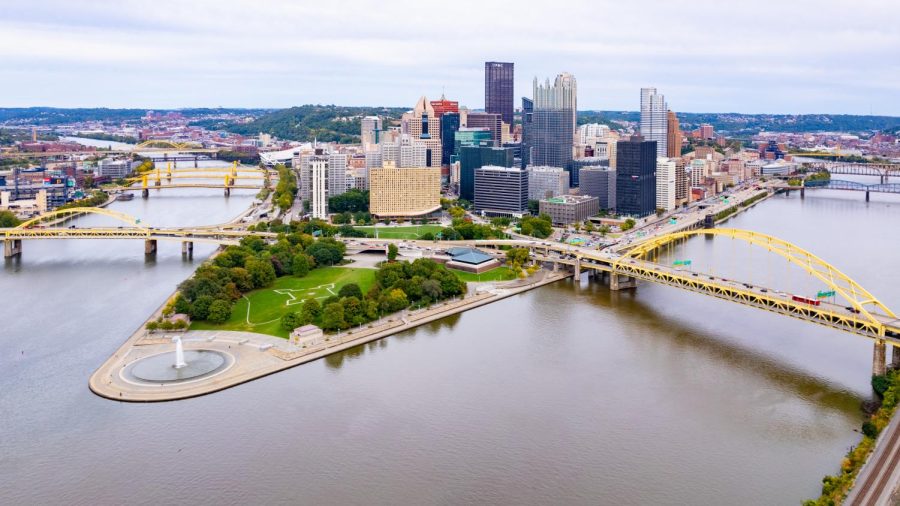 Coming off of Thanksgiving break, all I want to do is go back home at the end of the semester. For me, coming off of a nice visit with my family only makes it harder to come back to AU. Feeling the warm nostalgia of the area I grew up in and having friends and family to lean on during hard times back home makes the first few days back almost more difficult than finals week. Of course, what I’m experiencing is a bad case of homesickness. During times like this, I phone home to remember my family and turn to music by bands based in my hometown, Pittsburgh, PA. So for any other Pittsburgher who might be feeling extra homesick off of the break, I’ve compiled a list of Pittsburgh bands that I turn on when I’m missing home.

feeble little horse: feeble little horse is bringing back shoegaze in a fully Pittsburgh style. Formed by Ryan Walchonski and Sebastian Kinsler during their time at the University of Pittsburgh, the band has made their way up from The Deli, a venue on Pitt’s campus that hosts DIY college bands, to a headlining tour this winter. I discovered their EP modern tourism on Bandcamp and have since listened to their latest release, Hayday. Both of these releases feature emotional lyrics melded into instrumentals that incorporate the nostalgia of shoegaze and dream pop yet progress forward with modern indie influences. They’re playing The Pocket in DC on Dec. 29 and Club Cafe in Pittsburgh on Jan. 1, and I would suggest making plans to see them whether you’re at home for the break or in DC.

Mac Miller: Any Pittsburgher reading this would hate me if I didn’t include Mac Miller on this list. From his debut to his final album, Miller has cemented himself as a modern rap icon, and throughout his entire career, he’s proudly shown his Pittsburgh roots, adding special references in his music that only people from the city can relate to. I uphold that if you’re from Pittsburgh, it’s just in your blood to love Mac Miller’s music, whether you just know his popular songs or you’re a superfan. Turning on “Party on Fifth Ave.” helps me remember home in a fun, exciting way, and I’d suggest his music to anyone feeling homesick for the city of bridges.

Badflower: Badflower isn’t entirely from Pittsburgh, but since they’re a favorite in the Kessler household, and guitarist Joey Morrow, bassist Alex Espiritu, and drummer Anthony Sonetti are from Pittsburgh, I included them anyway. They gained huge recognition from rock fans with the release of their debut album OK, I’M SICK and have since released another album called This Is How The World Ends, done headliner tours, opened for My Chemical Romance, and received much critical acclaim, including This Is How The World Ends making the #38 spot on Loudwire’s top 45 list of rock & metal albums from 2021. I’ve been obsessed since I discovered them from a feature article in a Rock Sound magazine. Frontman Josh Katz’s witty lyrics explore mental health issues, satirize the tumultuous political climate in America, and call attention to social issues all through a hard-hitting post-grunge sound that provides the base for their consistently unforgettable releases. I saw them live at Stage AE two days before the release of This Is How The World Ends, and hearing songs from that album live for the first time was an experience I wouldn’t trade for the world.

Barlow: Barlow is a Bandcamp deep-cut shoegaze artist that’s been around since 2010 and most recently released their album Walls of Future on Sept. 17, 2021. I’ve been listening to them since then—Walls of Future has gone from soundtracking my AP Calculus homework to providing me with memories of not only listening to them in my bedroom but also exploring downtown Pittsburgh. Barlow is still relatively underground, so when I hear their music, I remember the local bands I’ve seen playing in DIY venues or restaurants and the small venues that have shaped my love for live music. Even unrelated to music, I think of everything that makes the city special to me—the weather changing on a dime before cross country meets, taking the T to the city to “crash” Anthrocon with my friends, and driving out of the Fort Pitt tunnels to see the entire city before me in all its beauty. Though they’re not a big artist, they’re a special one to me, especially since moving here. For that, I’d suggest giving them a follow on Bandcamp.